American involvement in and its complex relationship with the Middle East is explored in these three graphic novels. Part one covers from 1783-1954, from America expansion in trade to Suez. Part two covers 1954-1984 from a vibrant Russia and Israel at war in the Lebanon. The final part covers 1984-today and sees Bush fight Saddam invasion to Obama war in the sky and Geronimo. 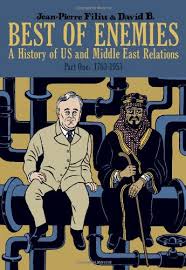 This series caught many in the international relations field, attention because of its bold vision. It caught mine because, one it reminded me of works of Joe Sacco, the journalist and graphic novel artist and two it involves world history and politics. Part one is a study in vastness. Detailing the relationship that developed between American, British and French growing empires and the then dissolving Ottoman and Arab states. It explores how via trade, subterfuge, political discourse and sheer force, the western nations crafted relationships of exploitation and cajoling their eastern counter parts, who in turn took the opportunity to steal and kill for reward. 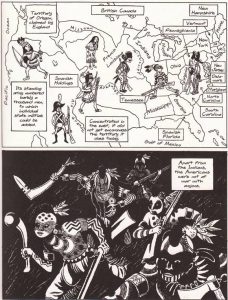 This in itself is important. For at once we see that the worlds history is made up of two sides and two narratives. These coalesce to create a version. Often that version has been hijacked by left and right opinion makers. They see history from a jaded perspective that substantiates their agenda but lacks the detailed rational of truth. These translations can then become directly effecting in positioning a narrative to a cause. What we have with Filiu work is a more nuanced approached. Still taking a position but also trying to shape a claim. So here it is more about detail then didactic discourse. The key to why this Part is so refreshing and essential is simply this. It never waivers from communicating it detail but also from forcing a judgement call. This approach avoids being embroiled in depths of Histrionics. 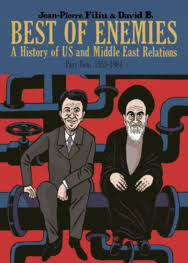 Part two is a tougher sell in this way. The shifting sands of the post war era have left us with a starkly hard right stance. From how Truman era political manifestations of support against crumbling colonial era forces washes away to Reagan era discourse. It is here that the graphic art nature of the piece comes into its own however. Fusing visual and written discourse by layers and events. Having supplanted the dark chicanery of the CIA with images that fuse the nightmarish qualities of this organisation and its action. 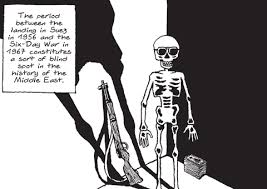 Murder and mayhem, naivety and nihilism grow in all quarters. The POTUS view aligns with a group of hardliners. Islamism replaces nationalism and so the next chapter is written in blood and bombs. This is captured beautifully by David B harsh black and white images. Bold fused shapes and shade ranges keep the tone perfectly. The growing rebellions are adsorbed in detail and this, this is magnificent. 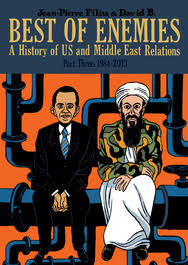 Part Three, released this week to a warm reception is a continuation piece. It lacks some of the drive of the previous two books. However this is due to the ongoing situation in America and the Middle East. Ignore that it finishes before Trumps Israel capital comments and instead see that it defines how we got there. So for this it is an essential stepping stone foregrounding today and the future. From details of Bush the firsts striking Hussain and Saud house taking this help instead of a rag tag band of Jihadists leads to Al Qeada. Then from Bin Laden as he shatters complacency to Obama reunified and restricted the warring mass. It is a head stone in the firm pillars set by its predecessors but it is just as well informed, narrated and textured. The work is exemplary and although you will feel short changed at the final act, history does this and not the work… 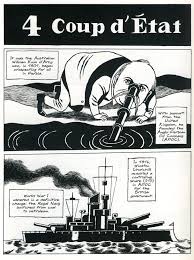