Horror Channel is to screen a season of films focusing on game-playing murderers and predatory psychopaths. So there’s no point hiding behind the sofa as that’s where they’ll be…

The TWISTED KILLER SEASON, which will broadcast on Saturday nights @ 22:50 from 6–27 June, features Michael Powell’s chilling masterpiece PEEPING TOM, the network premiere of the darkly psychological thriller HORSEMEN, the UK TV premiere of THE COLLECTOR and Dunstan’s 2012 sequel THE COLLECTION, in which ‘the masked deviant’ returns to claim more victims. 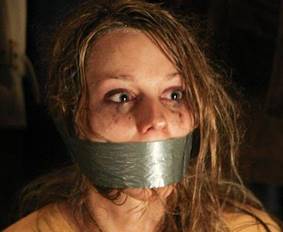 Dennis Quaid and Peter Stormare co-star in a dark psychological thriller by ‘Spun’ director Jonas Åckerlund. Emotionally distanced from his two young sons following the untimely death of his devoted wife, Aidan Breslin (Dennis Quaid), a troubled detective, investigates a series of murders that seem to be based on the Biblical prophecies concerning the Four Horsemen of the Apocalypse. As Breslin grapples with the case, he uncovers a shocking connection between himself and the four suspects.

This bloody, visceral entry in the “serial killer” genre is the directorial debut of screenwriter Marcus Dunstan, whose previous credits include Saw IV. After a stint in prison, Arkin (Josh Stewart) finds employment as a handyman. But Arkin decides to rob his boss in order to repay his ex-wife (Daniella Alonso). Venturing to his employer’s remote country house to make the heist, he soon finds himself — as well as the boss’ family — at the mercy of “The Collector.” This masked menace turns the house into a maze of fiendish traps. Only Arkin’s wits offer any hope of escape from gruesome death.

The sequel to Marcus Dunstan’s ‘The Collector’, the sick serial killer known as ‘The Collector’ is back and looking for fresh victims. When Elena (Emma Fitzpatrick) sneaks out of her house one night to attend an exclusive party, she can’t imagine the horror that awaits her. For ‘The Collector’ is there too. Forced into hiding, she finds and frees Arkin (Josh Stewart), who was thought to be the killer’s last victim. Arkin manages to escape, but Elena is taken prisoner. Thus begins a mission against time to free the young woman.

Michael Powell’s unsettling masterpiece stars Carl Boehm as Mark Lewis, an assistant cameraman at a London film studio, who has begun murdering women. He kills them, literally, with his camera and films the attacks and the murders. He also surreptitiously films what he can of the police investigation. At night he carefully screens and edits the footage. This is his great documentary, his life’s work. Mark leads the police closer and closer so that he can film the denouement, his own imminent capture and suicide.

During the 1945 endgame of World War II, German scientist Klausener worked on frightening new technology with the power to create an immortal Nazi army. Now a NATO task force is deployed to Eastern Europe to uncover what sinister enemy exactly appears to be mercilessly killing everything in its path.  It soon becomes clear that what they are facing is no ordinary foe. Only Lena (Catherine Steadman) a gutsy investigator on the trail of notorious war criminal Klausener (David Gant), can accept the reality of what they are up against – a battalion of living dead Nazi Storm Troopers. Directed by Steve Barker.

The surprise hit at Toronto Midnight Madness, this sharp shock of super-violent scares and sci-fi splatter announced director Joe Begos’ arrival as an exciting genre talent. Mark Fisher (Josh Ethier) disappeared from home in a blinding blue light flash. His friend Seth Hampton (Graham Skipper) was the last person to see him alive. Two years later, a series of atrocious, grisly murders leads Seth to believe that Mark has somehow returned, but changed into something different, strange… not of this world. Mark has indeed become a humanoid alien receptacle for evil – and the last place you should look is in his cellar.

The Blair Witch Project writer/director Daniel Myrick draws influence from the 2003 Scandinavian thriller Midsummer to tell this haunting story about a group of high school friends coming together for one last blast before heading off to college, and the strange events that begin to unfold when one member of the group suspects that her twin sister, who had recently committed suicide, is trying to contact her from beyond the grave. Stars Amanda Seyfried.

Directed by Lowell Dean, making his feature film debut, this is a full-frontal survival thriller not for the faint-hearted. Six forensic undergrads completing a university field exam on a deserted island, oblivious to the knowledge that the island was previously used for illegal biological experiments on hardened convicts. Welcome to the land of rampaging vicious skinhead, tattooed zombie! The film stars Katharine Isabelle, Nick Moran, Michael Shanks, Brendan Fehr and Jesse Moss.