Become a MANIAC with Franck Khalfoun and win a poster!
Home
Competitions

Become a MANIAC with Franck Khalfoun and win a poster! 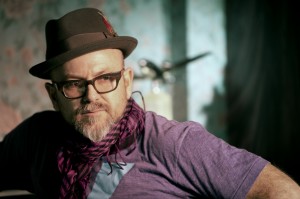 Out this week is Franck Khalfoun’s remake of William Lustig’s 1980 horror film, Maniac. Following mentally disturbed loner Frank (Elijah Wood) who has quite severe mummy issues, he captures unsuspecting women in LA before finding rather interesting ways of murdering them and scalping them completely. He then uses the scalps of his victims to ‘bring to life’ the mannequins that he surrounds himself with, but he always sees his mum and all her faults.

I took some time recently to chat with director, Franck Khalfoun about Maniac and what made him decide to dig up this cult classic. Keep reading because below is a special chance to win a stunning Maniac poster, designed by the award winning, Sam Ashby.

For Franck Khalfoun, it has been interesting road to get to where we find him today. Currently working on promotion for his recent picture, Maniac, I wondered what it took to get Khalfoun to where he was and what started his fascination in cinema. He explained to me that there was an old theatre in Paris which had been playing [the ultra-violent film based on the dystopian novel] A Clockwork Orange (Kubrick, 1971) for about 15 years straight. The poster fascinated a young Franck and when he was 12 he sneaked in. [The film was originally rated X in the USA, and cutting took place two years later on re-release before they gave it an R rating. The film was swiftly withdrawn in Britain, and was banned for 27 years until soon after Kubrick’s death in 1999] That was the moment that made Khalfoun realise he wanted to make movies. He cites Stanley Kubrick as his main inspiration.

It would make sense, that one of the first questions I asked regarding Maniac was really why the decision was made to remake the 1980 classic starring Joe Spinell. Interestingly it was working with Alex Aja and Thomas Langmann, which brought Khalfoun to the project. Aja has a wide list of recent horror films to his name, in a variety of roles. Working on Maniac, he was both producer and co-wrote the screenplay but he has previously worked with Khalfoun as writer on 2007’s P2 as well as being the director of Switchblade Romance and the re-make of The Hills Have Eyes. Langmann has come from a different grain, working as producer on Maniac, he has recently produced films such as The Artist and the Mesrine films starring Vincent Cassel. Khalfoun continues that another reason he was compelled to this project was the challenge of redefining a [cult] classic for today’s audiences.

One of the producers of Manic is the director of the original, William Lustig. I wondered whether Lustig had given any advice about the story when Franck first started on the film. Khalfoun explains; “I met Bill on the final days of the shoot. The producers had been in contact with him, but I felt it was important to have my own experience as an audience member and not an insider, and  share my own interpretation with today’s audience.”

The main character in Maniac is Frank (not named after the film’s director!). Frank is played by baby faced Elijah Wood, who is probably most famous for playing Frodo Baggins in Peter Jackson’s Lord of the Rings. I was thinking about this casting, and although Wood was so very interesting as Kevin in 2005’s Sin City, I still look at Wood as a ‘good‘ guy. I asked what made casting Wood seem right for the character, and were there any worries about disregarding the image and connotations he has made for himself?  Interestingly, Khalfoun explained that this image was actually a good thing to have engrained in the minds of the audience before watching Maniac because actually the image of the good guy was helpful in creating a sympathetic character. It made it that much worse when he commit[ed] the horrible acts of violence.

One of the reasons that Maniac stand outs in today’s cinematic landscape is because of one of the main stylised techniques used in the film. We spend the vast 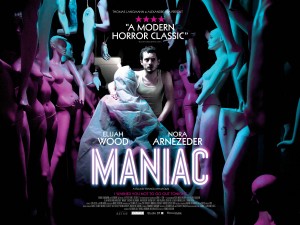 The challenge of redefining a cult classic.

majority of the film looking though Frank’s eyes and I suggested that this was a risky move in a cinema, which is so fast paced and where audiences can get bored very quickly. I wondered what made the team decide to use this brilliant and horrifying idea? He explains to me that Alex Aja and himself where looking for an innovative way to make Maniac. POV (Point of View) has been in movies since Peeping Tom, but no horror film had ever been entirely shot that way.

Furthermore, I explained that as an audience member I felt both alienated and complicit in the murders that took place as I spent more and more time ‘being’ Frank and viewing ‘myself’ in mirrors and windows. I wondered whether this was this something that stuck Khalfoun during the making of the film and whether he really wanted the audience to feel like this? I wanted the audience to feel trapped in his body. The cinema plays a big part in that concept since you are stuck in your seat forced to experience the events with little control over the outcome. Much like Frank is stuck in his body.  You are therefore at the same time complicit and repulsed. Therein lies the horror.

Maniac is filled with representations of horror tropes and connections to other films including The Shining (Kubrick) and Robert Wiene’s The Cabinet of Dr Caligari (Wiene, 1920). As a remake, it was bound to feel somewhat postmodern, referencing the original film and perhaps making points to other horror films, but I wanted to know what the thinking was behind this; especially as much of the audience may not be aware of this horror classic? Those who know the film [Caligari] may find similarities with with how Cesare’s killing spree is beyond his control, just like Frank, or how Cesare is unable to kill the beautiful Jane the same way Frank resists killing Anna. The night gown really looks like a wedding dress in Caligari. But for those who don’t know the film, Cesare and Frank simply look alike.

Another of the major elements of Maniac is its violent nature. Obviously it is inherent in the film due to its subject matter but I wondered whether there was a decision before filming about how violent the film was going to be? Seen as the main character is a professional serial killer, who captures and mames helpless women, it is something that may turn audiences away from watching. The violence in Maniac, is at times, really quite graphic and I wondered whether there was was ever a worry with it?  The violence is measured. It was important that it may be intense, but never enough so to disengage from the movie.

In my eyes, Maniac fits within a current trend of angry young men in very dark situations. This trend includes films like Simon Killer (Campos, 2012) and We Need To Talk About Kevin (Ramsey, 2011). I asked Franck whether he thought that we are currently living in an angry climate, and whether this is something discussed widely enough in cinema. He simply replied; I am angry. Yes. 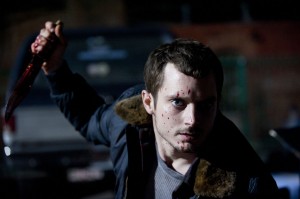 ...the image of the good guy was helpful in creating a sympathetic character...

I pointed out that I was fascinated with the way in which women were portrayed in Maniac and Frank’s relationship with them, especially the moments that hark back to his relationship with his mother. I wondered how how Khalfoun would reply to those under the impression that use of women is misogynistic in Maniac? Frank the character is undoubtedly a misogynist who murders women. Franck the filmmaker is not a murderer. Ha.

At this end of this somewhat manic interview, but really rather fun and illuminating I wondered what was next for Franck Khalfoun but he wasn’t ready to divulge any details about upcoming projects (there are some), but wanted to keep them secret and allow us to simply enjoy Maniac before thinking about anything else.

To celebrate the release of MANIAC, starring Elijah Wood, in cinemas 15th  March – we are giving you the chance win one of five posters.

Just when the downtown Los Angeles streets seemed safe, a serial killer with a fetish for scalps is back on the hunt. Frank (Elijah Wood) is the withdrawn owner of a mannequin store, but his life changes when young artist Anna appears asking for his help with her new photo exhibition. As their friendship develops and Frank’s obsession escalates, it becomes clear she has unleashed a long-repressed compulsion to stalk and kill.

Enter the competition below for the chance to win one of five posters of the terrifying MANIAC!

Which city does Frank stalk and scalp his victims?

Many thanks to Hannah at Grapevine Digital for organising the competition & interview.

Check out our FIVE STAR review of Maniac, here.