TRESPASS AGAINST US – Released 3rd July on Blu-ray, DVD and Digital Download 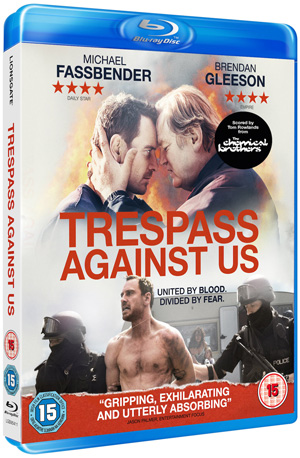 The critically acclaimed and entirely engrossing British crime thriller, TRESPASS AGAINST US, starring Golden Globe Nominees Michael Fassbender and Brendan Gleeson and scored by Tom Rowlands of The Chemical Brothers, will be released on Digital Download June 26th 2017 and on Blu-ray, DVD and VOD July 3rd 2017.

The first film directed by Adam Smith following his Doctor Who success, TRESPASS AGAINST US was initially selected to be screened in the Special Presentations section at the 2016 Toronto International Film Festival and is written by Director-turned-writer Alastair Siddons, known for Inside Out: The People’s Art Project and Turn It Loose.

TRESPASS AGAINST US follows three generations of the notorious Cutler family, living as outlaws in the Cotswolds, the heart of Britain’s richest countryside. The Cutlers live by their own rules, practising their own way of life—poaching, pilfering and provoking the police.

Chad (Michael Fassbender) finds himself torn between respect for his archaic father, Colby (Brendan Gleeson), and a desire to forge a better life for his children. When Colby coerces him into a major robbery one night, Chad is faced with a choice that will change his life forever. Should he follow tradition and do his father’s bidding as his rightful son and heir, or should he break the chain and set out on a new path?