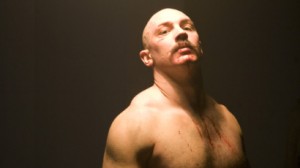 The 2009 award winning film follows the brutal life of prisoner Charles Bronson, played by a young Hardy in an undeniably gripping and ruthless British biopic.

The brutal true life story of British prisoner Charles Bronson, born Michael Gordon Peterson in 1952 to a respectable middle-class British family. Bronson has since spent almost 40 years behind bars and in solitary confinement for various offenses and is described as Britain’s most dangerous criminal.