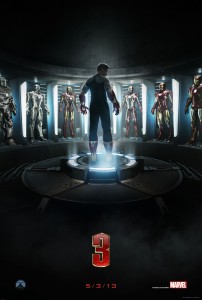 In the next instalment of the Iron Man series, Robert Downey Jr. reprises his role as billionaire playboy Tony Stark who is pitted against an enemy whose reach knows no bounds. IRON MAN 3, releasing in cinemas on 25th April, is set to be even more thrilling than ever!

Film search engine FindAnyFilm.com, which lists film availability in all formats, has recruited IRON MAN 3 to support in their ongoing ‘Moments Worth Paying For’ campaign. The campaign aims to inspire support for the UK film, TV and video industries by celebrating unmissable movie moments and the positive emotional effect these have on the viewer.

With IRON MAN 3 boasting over 2,000 spectacular visual effects and jaw-dropping stunt sequences, the new trailer brings to life the technical brilliance that goes into creating a movie experience worth paying for. Dramatic clips of the original ‘Moments Worth Paying For’ trailer are fused with high-octane excerpts from IRON MAN 3, to further remind audiences of the value of the film experience.

The 35-second trailer will be shown in cinemas nationwide over a 4 week period from 29th March. The campaign will also highlight the wealth of legitimate ways to watch film and TV by directing viewers to FindAnyFilm.com where film fans can find all films, all in one place, all above board.

said: “Marvel film and comic fans completely understand the time and effort that goes into turning the stories they love into full length feature films as is the case with Iron Man 3. At Disney, we’re committed to supporting consumer awareness campaigns to tackle copyright infringement, so we’re delighted to be working with the Industry Trust to inspire audiences about the value of film and showcase the technical wizardry involved in making the movie moments film fans love.”

Liz Bales from FindAnyFilm.com said: “We’re delighted to be working with Disney on the latest film in the Marvel franchise. The enormous fan following for Iron Man 3 will help ensure that our work to inspire and inform film fans about the value of movie moments and the wealth of official film, TV and video services available reaches audiences right across the country.”