On Sunday 24th July 2011 BAFTA was brimming full of directors, producers and other industry professionals for the third Short Filmmakers Market, a day filled with discussions, seminars and screenings. 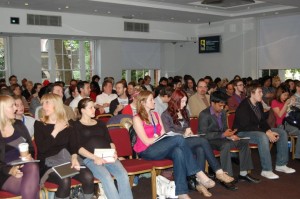 The event kicked off with a discussion on How to Finance the Short Film presented by the London Film Academy. The panel included Jed Simmons, Director of Youtube Next, who pointed out the advantages of getting involved with the site to find an audience. Also there was Mike Cook, Brand Manager of the popular Youtube Channel Simon’s Cat, whose black and white cartoons have amassed over 145 million views, proving Jed’s point. Director Luke Snellin and Amanda White gave an insight into attaining funding through other measures. Luke Snellin found success after entering his short films into competitions, gaining both exposure and funding. His short Mixtape won the Virgin Media Shorts competition in 2009 and he is now working on Disco which premiered at Latitude Festival. Amanda White explained how much IdeasTap can help younger filmmakers get their projects off the ground. Overall this discussion demonstrated just how many different paths filmmakers pursuing funding can take.

Later was The Dimension Debate: Is 3D Worth It? presented by Sci-Fi London. Currently a very hot topic, the event pitted industry professionals both for and against the format to discuss the future of 3D film. On the whole the panel seemed to be in agreement; 3D conversion never looks good, but sometimes filming in 3D can work brilliantly such as with Avatar. The discussion was extremely thought provoking and certainly makes one realise that 3D may be here to stay. As it was pointed out both music and colour in films received criticism initially but soon became part of the norm, so why not 3D?

After this another important issue was discussed as Shooting People presented Crowdfunding Your Films. Among the panel were 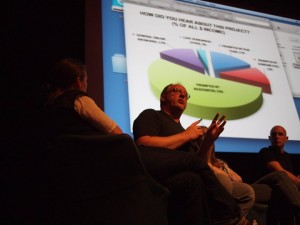 George Vincent from Sponsume and Michael Troughton from We Fund. Both of these sites act as platforms for filmmakers to raise money for their projects through donations from the public. Also on the panel were a variety of filmmakers who have used crowdfunding, including Jordie Montevecchi who is currently trying to fund his new documentary Sandgrains. What became apparent is that crowdfunding is not as simple as it first apperas. From an outsider’s perspective it may seem like an easy way to get funding for your film, but nothing could be further from the truth. In fact to be successful it seems like one must be willing to dedicate themselves fully in order to beat the competition.

These were just three of many great events throughout the day and BAFTA have done a fantastic job. The Short Filmmaker’s Market 2012 will be something that anyone with an interest in film should definitely attend next year.