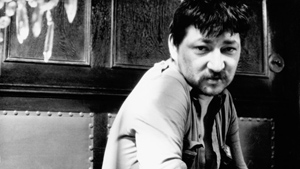 A fearless artist who knew no taboos, Fassbinder combined scathing social criticism with profound psychological insight. After failing to get into film school he turned instead to the theatre, rapidly winning renown as a radical, innovative writer-director. With ferocious energy, though minimal resources, he started to make films, building a loyal team of actors and technicians drawn from the theatre (his first 10 features were made in less than two years). An insatiable film addict from early childhood, Fassbinder drew inspiration from the French New Wave and, later, from the Hollywood melodramas of Douglas Sirk and others. But what emerged from his dazzling fusion of style and content was a powerful, personal vision of people imprisoned by social constraints and their own contradictory desires. Provocative, poignant, darkly witty: these are films that could change your life.

“Seeing a Fassbinder retrospective is better than drugs, liquor and sex put together. If he was alive today, I’d fall to my knees in front of him. Dead? Well, we have to pray to somebody, don’t we?”
John Waters

Fear Eats the Soul
The Niklashausen Journey
Whity
Pioneers in Ingolstadt
Gods of the Plague
The American Soldier
Why Does Herr R. Run Amok?
The Marriage of Maria Braun + Q&A with actor Hanna Schygulla and editor Juliane Lorenz
Eight Hours Don’t Make a Day
Fox and His Friends
The Merchant of Four Seasons
The Bitter Tears of Petra von Kant
Martha
Effi Briest
I Don’t Just Want You to Love Me – The Filmmaker Rainer Werner Fassbinder
The Bitter Tears of Petra von Kant
Fassbinder
Beware of a Holy Whore
Rio das Mortes
Love is Colder than Death
Katzelmacher

We have 3 pairs of tickets to give away!

Winners can pick which film they want to go to – subject to availability. Please only enter this competition if you are able to attend screenings at BFI Southbank, London.

In which Fassbinder film is the lead role played by Hanna Schygulla?