Miles Szanto tells us about Bruno & Earlene Go To Vegas

Last year, we brought you an interview with director, Simon Savory, about his upcoming debut feature, BRUNO & EARLENE GO TO VEGAS. The film now finds itself in the editing process, and we are really excited to reveal this special interview, with the lead actor, Miles Szanto, who plays intersex teenager, Bruno.

1. Hi Miles, do you want to tell us a little about yourself and what work you have done before Bruno & Earlene Go To Vegas?

I’ve been working as an actor since i was about 9. I honestly have loved it for the same reasons the entire time too, which is a really nice feeling. I started acting on Australian kids serials and as I got older I figured out what kind of stories I felt passionate about telling.

2. How did you become involved in the project?

I came onboard this film through Simon Savory, the director. We’d met in Cannes a few years earlier… I thought he was a lovely, and talented guy. I’d moved to LA and heard he was in town too. I’d seen bits and pieces about the new film he was working on which I thought sounded incredibly exciting and met with him really to just catch up and hear what it was he was making. When we met he told me the project was under-going an over-haul due to a recasting, and that he couldn’t properly say what that was but he wanted me to read the script… I did, in it’s first very different incarnation and was totally blown away by the story and his unique approach to writing this kind of film. We chatted a lot about the project and once our minds were flowing on the same frequency, he offered me the role of Bruno. I was over the moon.

3. In the film you play, Bruno, an intersex teenager. How was the experience of portraying something we don’t often see on film? 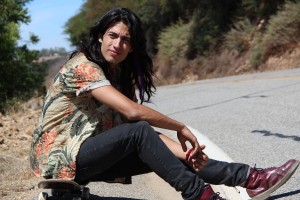 I told a few friends before I started the project what kind of role I was about to embark upon and their response was always something to the effect of “wow! what a huge responsibility”. I decided to not take that on and really go about it the same way as I would any other role. I’m not playing to a community or a cause, but a character going on his own journey in his own way, dealing with his own condition. I think if I’d put too much thought into the huge responsibility of playing an intersex teen I would have crumbled under the pressure. I got the shooting script not more than a week before we took off into the desert so I totally immersed myself into anything I could find that dealt with the subject. Simon gave me films like XXY, Orchids, Last Summer of the Boyita, Ma Vie en Rose, Transamerica as well as books to research like How I Became A Nun and As Nature Made Him and a whole load of websites with information on chimerism . It really opened my eyes to voices that are unfortunately not so heard.

4. Bruno, like yourself is an Australian in another country, trying to find himself – how did you relate to your character?

When I got involved with this project I’d recently run away from home to live in LA just like Bruno. So that sense of self-discovery and not quite knowing what to expect around the next corner was something, which I really was living in my own life. Bruno is very different to me, but Simon wrote the character so well i did find it easy to connect to the essence of who he was.

5. From the looks of the clips and publicity stills, it is a really beautiful film and very sexy – were their any shy moments on set when it came to sexing it up?

The entire cast and crew were extremely open and accepting. It was the most diverse and accepting cast you could possibly imagine, it was quite difficult to feel shy on this set. My character is quite asexual in the film, at this point in his life, so there were no sex scenes on my part. Nudity can be confronting, but those moments in this film are so beautifully character driven, it wasn’t really a concern. And who doesn’t want to find an excuse to get naked in the middle of the Nevada desert?

6. How was working with the crew on B&E?

B&E was the most unique experience I think I will ever have in my life. I’ve made friendships on the project that I know will last a lifetime. As an actor my ideas have changed but as a human being my mind was so greatly expanded by the people I got to become friends with.

Bruno & Earlene Go To Vegas will be premiering at film festivals this summer.