Welcome to Casting Call. In this series I’ll be taking a look at the people who, arguably, most profoundly and most visibly effect our response to cinema; the actors. Each week I’ll profile and look at the career of an actor from one of the week’s cinema, blu ray or dvd releases, and discuss several of their films and performances.

On Friday Jurassic Park was re-released to cinemas (see my 5 star review HERE), and so I thought I’d take the opportunity to talk about a hugely underrated actress who made her only real fforay into blockbusters with that film: Laura Dern 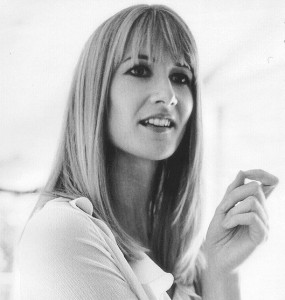 If not quite Hollywood royalty, Laura Dern was certainly born to Tinseltown nobility. Her Father and Mother were (and are) both successful and well regarded actors, and their daughter got her start with uncredited roles alongside her mother in Burt Reynolds vehicle White Lightning and as ‘girl eating ice cream cone’ in Maritn Scorsese’s Alice Doesn’t Live Here Anymore.

Dern didn’t do any substantial acting work until she was in her teens, making her credited debut at 13, alongside Jodie Foster and the Runaways’ Cherie Currie in Foxes, but it wasn’t until she was 18 or 19 that Dern really began to do a lot of acting, breaking out with a pivotal role as the blind love interest of deformed Eric Stoltz in Mask. In her early career, Dern tended to be cast a sweet natured innocent young woman, usually rather younger than she was, This probably reached its height with Blue Velvet, her first film for David Lynch, in which she seems to be the sole innocent.

This association with Lynch seems to have spurred Dern on to take some riskier parts, not least one in Lynch’s 1990 film, Wild At Heart. Playing Barry Gifford’s heroine Lula Pace Fortune, Dern revealed another side of herself, never Hollywood’s idea of a stunning beauty (which, frankly, says bad things about Hollywood), she nevertheless threw herself into this profoundly sexual character, embracing the frequent nude and sex scenes with apparent gusto. What she never loses sight of though, in this or really any other role (well, except Recount and Inland Empire), is a certain innate innocence and goodness. Lula may be a very sexual being, and her mother (played by Diane Ladd) may object to both her boyfriend (a typically unhinged Nicolas Cage as ex-con Sailor Ripley) and her behaviour, but when she’s confronted by Willem Dafoe’s Bobby Peru there is an upsetting sense of an innocent being taken advantage of, and the film’s Wizard of Oz motif has darkness always encroaching on Lula’s pursuit of a fun, happy, life with Sailor. In a bizarre and brutal film that can be hard to relate to, Dern is a sympathetic centre.

1993 saw collaborations with two big name directors; Clint Eastwood for A Perfect World, and Spielberg for some little thing called Jurassic Park. There has been little written about how that turned out. Like many of Dern’s films, A Perfect World, which has Kevin Costner as an escaped convict who kidnaps a child and Eastwood and Dern as the police pursuing him, is still rather underrated. 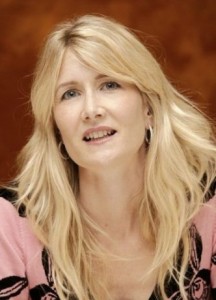 Despite a fine critical reputation, Dern worked relatively little in the rest of the 90’s, adding only an acclaimed turn as an alcoholic whose pregnancy puts her right in the middle of the abortion debate in the US in Alexander Payne’s first film; Citizen Ruth, a voice role in Bastard out of Carolina, and Joe Johnston’s October Sky, in which she was perfectly cast as a near angelic teacher. None made a big box office impact, and the first two still remain unreleased and all but unknown in the UK.

There may be a reason that Dern did less work in the second half of the 90’s than she had in the foregoing seven or eight years, and that’s to do with her TV work. She’s always been willing to work in television, and said that she didn’t work for a full year thanks to the controversy that followed the double episode of Ellen, in which she played the lesbian who finally prompted both character and actress to come out of the closet. On the other hand, TV also brought Dern one of her best and most acclaimed roles, playing Florida secretary of state Katharine Harris in Recount, which dramatised the three weeks during which nobody knew who has won the 2000 US Presidential election, for which she won a Golden Globe and was nominated for Emmy and Screen Actor’s Gulid awards.

In film, she has continued to impress in supporting roles, reprising the role of Ellie Sattler for Joe Johnston in Jurassic Park 3, and playing many ‘friend / relative of the lead’ roles in independent movies like The Prize Winner of Defiance, Ohio, The Year of the Dog and Lonely Hearts. While she’s always good in these parts the roles are never really all that meaty and seldom offer much screentime, so it’s always apleasure to see her take a bigger role whether it’s in marital infidelity drama We Don’t Live Here Anymore, or her third collaboration with David Lynch: INLAND EMPIRE.

For me, Laura Dern is just a welcome presence in a film, you know that she’ll turn in a down to Earth, believable performance, that there won’t be any actorly tics about her. The closest she comes to having a signature style is that there is a warmth about most of her characters, an innate likeability to her as an actress that helps you feel let in to her characters inner lives. Whether that’s choice or something she simply has, I’m not sure, but it certainly means that every time I see her name in the credits of a film I relax a bit, cause I know there is something worth watching on the way. 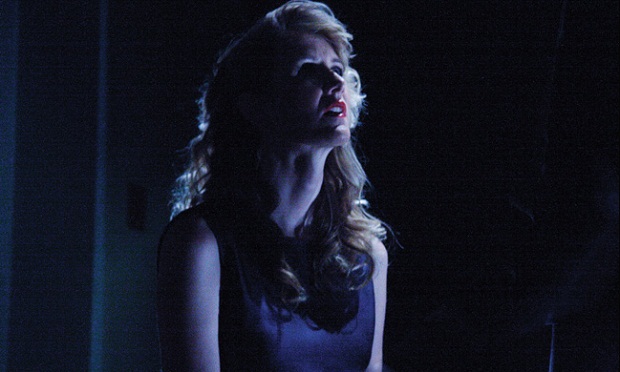 Dern’s third collaboration with David Lynch is really something. What is it? That’s kind of a tough question. If I have to sum it up quickly I’d say it’s a three hour journey into the fragmenting psyche of a woman who is either a successful actress who is going mad while making her latest film or a homeless prostitute who is beginning to believe that she’s a famous actress making an art film. Which, if either, of these is true is never really clear.

What is clear is that David Lynch wants to envelop us in this evolving nightmare, and he does so completely. We experience INLAND EMPIRE like a dream; a series of linked digressions that only really add up to a whole when we step outside and examine them. The glue holding it together is Dern’s genuinely extraordinary performance. Lynch was so impressed with her that he mounted a one man Oscar campaign for her, taking a cow out to a traffic island in LA in lieu of a regular ‘For Your Consideration advert. Despite having said that she knew neither what the film was about nor who she was playing, Dern establishes two quite different characters (Nikki, the outwardly friendly, but, one suspects, actually rather mercenary and manipulative actress and Susan, the damaged, abused hooker ) and plays them both with an almost disturbing dedication and reality.

The film’s centrepiece is a long monologue by ‘Susan’ to a psychiatrist, in which she tells the story of when she was raped, and fought back. “When the police came and they asked what happened, I told them ‘He’s reaping what he’s been sowing, that’s what.’ They said ‘Fucker been sowing some pretty heavy shit.'” It’s jaw dropping because it’s something we really haven’t seen from Dern before; such force, but also because it’s so utterly convincing that that thought only occurs after the fact, because Lynch and Dern have sucked you in so completely to this nightmare world.

INLAND EMPIRE is a strange and disturbing film, and I mean that in the best way. 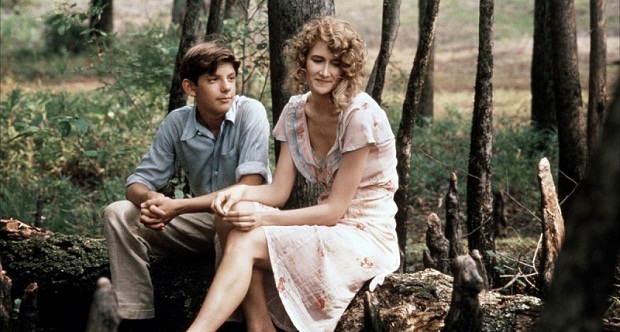 Well, second best performance, but I have a rule that I don’t put the same film in both categories. Dern’s Oscar nominated turn as Rose, a young woman who turns a deep south family upside down when she comes to work for them, thanks to her naive attitude (bred in, it is established, by an abusive background) that any kindness ought to be repaid with sex.

The film sets up Rose as an irresistible woman, and you can really buy into that, as well as being beautiful in the role there’s just such charm to Rose. It’s a gift of a part, complex in that Rose really grows as a person throughout the film (helped by Ladd’s character, the proto-feminist mother of the family) and it also offers Dern many great lines (“I’m only a human girl person“). In her hands Rose is simple, but never stupid. Even in moments that should be uncomfortable, as when Rose, after a fight with ‘Daddy’ (Robert Duvall) asks to get in bed with the 14 year old son of the family (Lukas Haas), the character’s innate sweetness keeps you from feeling that she’s a bad, rather than a naive, person.

This is a fine line to walk, as is the one between comedy and drama (just a little indication that Rose understands that she’s funny would undermine the reality of the performance, but Dern never does this), and she walks it beautifully, making Rose, who could easily be a caricature, a living, breathing person. 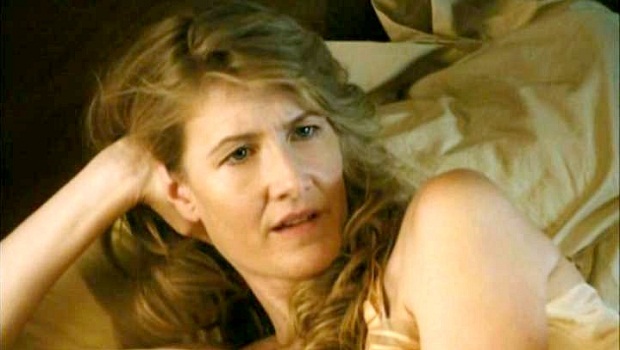 I would have put Little Fockers here (Laura, why?), but I haven’t actually seen it, so I must be a good critic and not discount the (slender) possibility that it might not be as rampagingly hideous as I’ve heard it is, so Lonely Hearts ‘wins’ instead.

Lonely Hearts isn’t awful, it’s more of a missed opportunity. It takes an intriguing murder case (that of Martha Beck and Raymond Fernandez, whose murders were first dramatised in The Honeymoon Killers) and botches the telling with miscating (Salma Hayek as the fat, ugly, Beck… seriously, SALMA HAYEK!) and disengaged performances from John Travolta and James Gandolfini as the detectives. Dern does okay, but she’s got a thankless role as Travolta’s girlfriend (not buying it for a second, by the way) and seems rather adrift. Maybe she’s a victim of the cutting room floor, maybe she was as bored making it as I was watching it, either way, fans can safely ignore it.

Next Time: Casting Call is going fortnightly for the next month, while I attend the London Film Festival (watch for my festival diary here). Next time we’ll look at Michael J. Fox, as The Frighteners arrives on Blu Ray