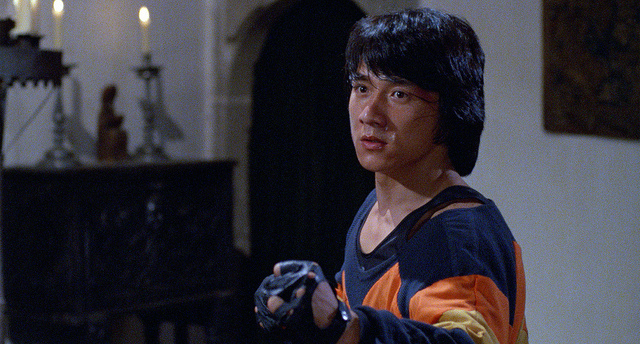 Jackie Chan films are an acquired taste. The plot is always silly, and really only watchable due to his natural charisma, the incredibly choreographed fight scenes that have made him famous, and of course his willingness to injure himself. A film that combines the talents of Chan with other martial arts masters Sammo Hung and Yuen Biao should be a winner, so it’s a shame that Wheels On Meals keeps it’s wheels spinning for so long, only really showcasing the star’s talents in the final third of the film.

The plot is borderline nonsensical. Thomas and David (Chan and Biao) are skateboarding fast food chefs in a Spanish forum, who end up embroiled with a detective (Hung – also the film’s director) and his search for a missing girl (Lola Forner). It’s a simple enough plot but it takes a long time to get to the point, with plenty of contrivances to make it more complicated than it needs to be. 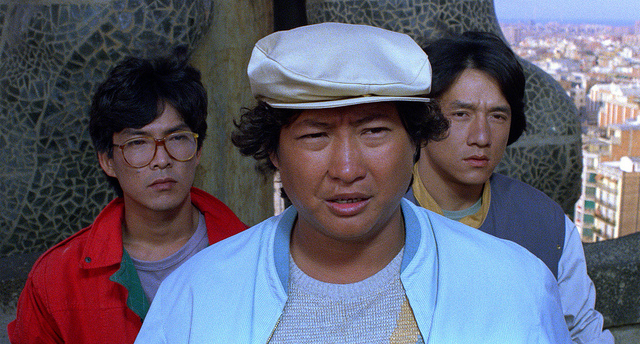 It may take over an hour before the action starts in earnest but the quality of the fight scenes means that it is worth the wait… just about. There is an awful lot of wheel-spinning before we get to the big showdown, and a ton of clunky exposition. The dialogue isn’t great, and the non slapstick jokes often fall flat. Some of this can be put down to the meaning being lost in translation, but mostly it just slows the film’s pace down. There are a couple of nice moments – the patients at the mental institute are a highlight, especially telling the leads that they’re “crazy, not stupid” but by and large the film feels bloated and longer than it is, which is a bad sign for a light action comedy. 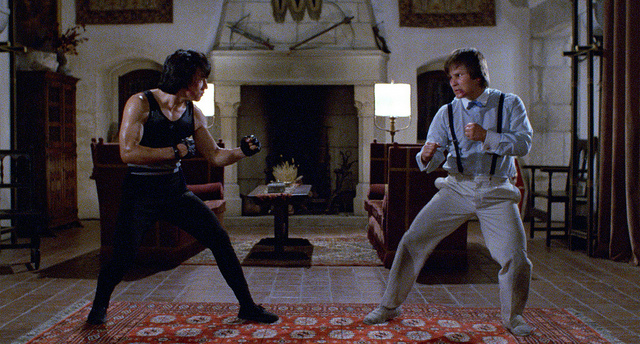 However the final fight sequence is rightly lauded as one of the best of Chan’s career. Chan has a formidable opponent in Benny Urquidez (probably best known to western audiences for a different iconic fight scene in Grosse Pointe Blank). It’s an incredibly intense, brutal fight, pairing two very different styles of fighting. and they both look utterly exhausted by the end.

The most unique thing about Jackie Chan as an actor is his impressive lack of vanity; he never takes himself too seriously, and Hung recognises this, seamlessly combining Chan’s athletic fight sequences with some genuinely funny slapstick. Meanwhile Yuen Biao is sweet as Chan’s guileless flatmate, and performs potentially the most dangerous yet low-key stunt of the film, falling from his window onto the pavement below. Hung also gives a strong performance as the endearing private detective, and often has to work the hardest by both performing impressive stunts and acting like a clumsy idiot while doing it!

Wheels On Meals is an incredibly dorky, silly film. The fight scenes are brilliant but it takes a good long while to get to them, and both Chan and Biao make for endearing and likeable heroes, while Hung gets the lion’s share of the laughs. The plot is paper thin and the dialogue is cheesy, but that doesn’t matter when you’ve got three of the best Chinese martial artists together in one film. It may be flawed, but it’s a lot of fun! 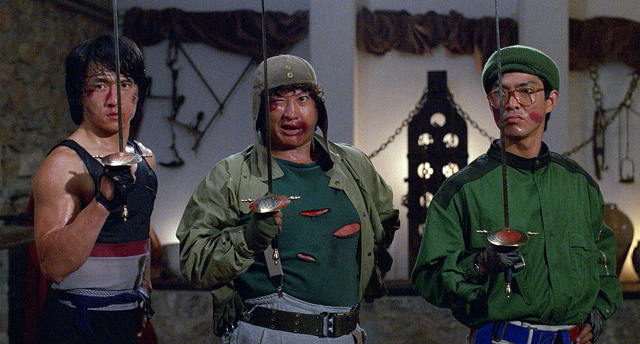 The 2K Blu Ray transfer looks a lot better than it needs to (It’s a Jackie Chan film, nobody’s looking at the cinematography) the Spanish locations all look great and there’s some surprisingly creative camerawork – all of which looks even more crisp on this transfer.

Extras on the Blu Ray include interviews with Hung, Biao, Urquidez choreographer Stanley Tong, and a rare outtakes reel which would later become a traditional part of Jackie Chan films. There is also the option to watch the film with original Cantonese audio or a new audio track mixing the Cantonese dialogue with the alternative international soundtrack.