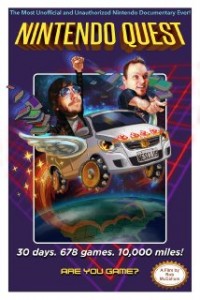 Take a some friends, an obsession with the Nintendo Entertainment System and a camera and you pretty much have the ingredients for Nintendo Quest, a documentary that you never realised you wanted and still don’t having watched. But yet, there is something satisfying and enjoyable about Robert McCallum’s documentary that tracks the progress of Jay Bartlett whose aim is to collect over the course of 30 days all 678 official retail licensed games for the NES. Over the course of the journey Bartlett and McCallum fanboy over their discoveries, explore some of the most colourful of Nintendo history and look at the various elements that make a game from the system itself, to the music, art and graphics. Of course for someone interested in Nintendo, or video games in a wider, cultural context, Nintendo Quest is quite the little gem but for the rest of us mere mortals it’s probably a bit too much.

The film sets up various bits of drama here and there; from a rival buyer taking the games they are looking for out from under them, the mysterious seller over the phone who apparently is willing to sell a copy of one of the rarest all the games as well as Jay’s own history that he deals with throughout the film and is able to apply his love for the games to help him through.

Nintendo Quest is a fun little film; charming because of the DIY nature of its production and yet somehow Jay becomes relatable as a subject because he spurred on by his need to achieve something so very out of this world and yet it would possibly change him for the rest of his life. It’s a film you probably only need to see once and whilst it doesn’t teach you are much as it possibly could about Nintendo and its incredible history, it looks a very specific moment in time and looks to explore the games themselves and the kinds of people that bought them.