Frances most celebrated new wave inspiring, innovative and iconic film maker Jean-Pierre Melville has 6 of his most significant films released in this STUNNING collection. He was the film maker that transformed and transcended. He avoided cliche and often avoided trends. He made the criminal a saint and the saint, a hero for the common good also. From 1956s BOB LE FLAMBEUR to 1972s UN FLIC. This collection exposes the great films and the great film maker to a new and ready film generation.

For me this set is a few steps up both in terms of visually and in content, to the earlier released Melville DVD set. Starting with the very good BOB LE FLAMBEUR, a tricky story of criminal elements and black humour, you have a simply beautiful new 4K restoration that is divine. I am sold on this alone. The new extra retrospective documentary is so-so but the film is worth every penny. 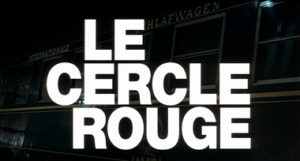 LE CERCLE ROUGE on the other hand is far less value for money in my opinion. It is still a great film of cross, escape, plan and an inspector setting out to destroy crime but the Blu Ray looks worn. By this it is me saying it looks like it has not been given any embellishment or treated to a clean up. The film is not treated as well as it should in extras either and I was convinced that I have seen these before.

L’ARMEE DES OMBRES well for me Melvilles best film about the French resistance and its fight, the blu ray looks good though no 4K restoration sadly. The extra is excellent and I may not have seen it before but on the blu it really shines. The film itself is compelling, powerful and its conclusion is as complex as its subject. LEON MORIN, PRETRE is a lovely tale of a priest communicating his faith without war or violence. The 4K is again stunning and I have to admit its a major step up from that mixed light DVD of yore. The film is well worth watching for any a film fan and any a fan of meditation on subjects like religion, ethics and politics. Belmondo gives the performance of his career and proves that he can act. The extra on the disc is superb as well. Well done Labro. Wonderful. 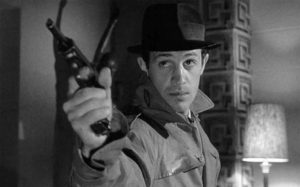 LE DOULOS feels like an old friend. Its about duplicity and criminality but its told with skill and style. The new 4K brings this to the fore and allows that lovely black and white to glow on Belmondo face. Its a very good film that has been treated very well.

All in all this is a set to buy and keep forever more! 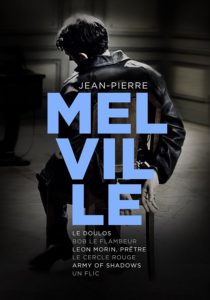 In the mood for Melville documentary – 52 minutes