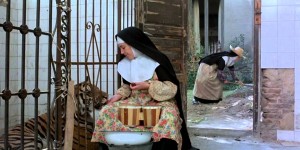 Studio canal releases 6 of Pedro Almodovar’s films, newly restored and with additional extras made specifically for this release. We have the blackly comic swipe at the catholic church DARK HABITS, the hysterically sardonic WHAT HAVE I DONE TO DESERVE THIS, LAW OF DESIRE a sexual fantasy and parody, WOMEN ON THE VERGE OF A NERVOUS BREAKDOWN melodrama and soap merge and KIKA and THE FLOWER OF MY SECRET. 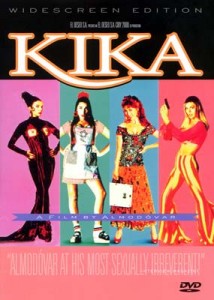 The release is a problem for some. By some I mean me and by problem I mean that I have already invested in the double set of the great Almodovar work.  So I and I suspect many of you know the films and have them sitting on the shelf ready to watch. So the question is should we reinvest in this set or not? Well I have decided to rate the films and extras one by one and then score the whole, giving you and me the chance to decide. DARK HABITS is an early Almodovar film. It is a wickedly clever satire and though one he distances himself from due to compromises he made, a very good piece of film making.The discs extras worth time is the interviews of key talent. Film 3/5 extras 3/5 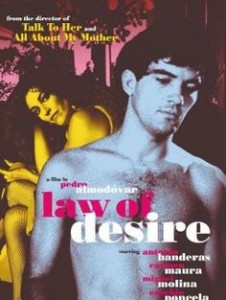 WHAT HAVE I DONE TO DESERVE THIS? has the sardonic edge of his later work but with a clever insight into the world of the modern woman. I was overjoyed to see it again and relished the second viewing. The extras are little but the stand out is the interviews piece with the documentary. Film 4/5 extras 3/5

LAW OF DESIRE is a sex dream and has some content that will delight those of a soap excess. It challenges and equally offended those sitting in its presence.The extras here are the same interview doc, which adds litte and an introduction that is about as good as it gets. Film 4/5 extras 2/5 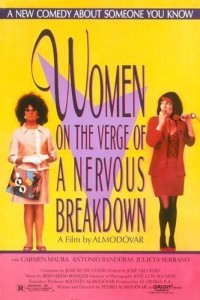 WOMEN ON THE VERGE OF A NERVOUS BREAKDOWN is like as if Sirk and Fassbinder had a car crash child and then made a soap opera about it. I found it annoying then, annoying afterwards and annoying now. Sacrilege I hear you scream, well stuff that and listen to this. The film is a must see for any film fan or film lover of the high drama kind. It is Almodovar’s most extrovert work (a very rich thing to say on his work indeed.) The extras have a golden egg of the great man talking and walking through the film. Film 3/5 extras 5/5

NEW: Around Women on the Verge of a Nervous Breakdown – Featuring interviews with Pedro Almodóvar, Loles Leon and Rossy di Palma

KIKA my personal favourite for its power and its subtle brilliance. Not seen it? Well it was panned but what do critics know! Extras crammed to the brim with good stuff and all are very worth while but the little ones are best. Film 5/5 extras 5/5 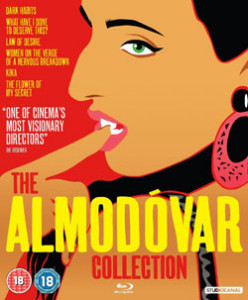 THE FLOWER OF MY SECRET not the film to secure his craft but a very worthy film in that it is powerful, emotive and contained. This is the film that showed he knows balance and feel as well as form and subtle rhythms of actors. Extras are rich but the Pedro and Maria one stole my heart and shows a master and a muse. Film 3/5 extras 5/5

So the boxset as a whole needs to be contemplated and the scores need to reflect if you should buy it. Film 22/30 extras 23/30. The scores suggest to me that the films are very good if not some of his best work and can be re brought alone for the restored freshness but the extras in places are giving us little and in other it is an embarrassment of riches. In all buy the set and watch the film but not for the extras. Just for the brilliance.