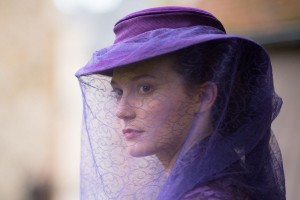 Sophie Barthes’ Madame Bovary is finally arriving on DVD in the UK and fights it corner well as a worthy adaptation of the Gustave Flaubert novel and yet as time goes on, it seems to become harder and harder for filmmakers to create their own vision of this well known tale. You could look to Claude Chabrol for his Isabelle Huppert starrer or any of the multiple television adaptations of the bored housewife and the lengths she goes to take control of her own destiny – there really is no shortage of filmmakers trying to put their own stamp on the story.

As far as this version goes, it is fine and yet sadly, also quite forgettable. Barthes’ film has an incredible cast including Mia Wasikowska as Emma Bovary, Ezra Miller as Dupuis, Paul Giamatti as Monsieur Homais, Logan Marshall-Green as The Marquis and Rhys Ifans as Monsieur Lheureux – all of whom perform with the best of intentions, plodding through the script. Wasikowska is (as often) wonderful to watch as she storms the screen and often tells the audience more through the emotion on her face than the dialogue itself. Sadly through, the erotic intensity and the sexual tension that this story requires between Bovary and say Dupuis or The Marquis isn’t there.

The film begins with good intentions and something that is cemented early on is that the story is told from Emma’s point of view – she is in control of the narrative, and Barthes really does manage to explore some of what lays beneath the surface from a woman’s point of view. This is naturally refreshing to see, especially as so often, the big screen period drama relies upon its male lead for story and sexuality. The men around Emma in this film are acted upon or are lesser than what they could be. What is most interesting is that Wasikowska’s Emma doesn’t speak for the first 10 minutes of the film. She is at a school, returns home to her father and then marries Charles Bovary (Henry Lloyd-Hughes) following her father’s arrangement. Everything is being done to her and she has no control over her own life. That is until she finds her voice.

There are so many themes in a tale like Madame Bovary, which makes its retelling as prevalent today as it was in 1856 when the

novel was first published. But alas this film does little to further discussion and seems far more interested in the look and the poetry of the story. The film certainly looks fresh and majestic with beautiful landscapes and expertly crafted costuming but it doesn’t seem to do anything more.

This Bovary will simply be added to the hall of adaptations with little consequence or reason to re-watch.