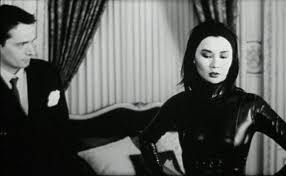 A film about the making of another film, that is a remake of another film, inspired equally by Francois Truffaut Day for Night, melodrama and the classic serial films of early cinema. French director René Vidal (Jean-Pierre Léaud) is on the verge of irrelevance. His final chance of salvaging his career comes in the form of “Les Vampires”. A remake of a silent-era masterpiece about a gang of thieves, led by Irma Vep. Chinese star Maggie Cheung (Maggie Cheung) is cast as Vep but the production is not as straight forward as it seems….

Olivier Assayas recently directed ‘PERSONAL SHOPPER‘, featuring a star turn by Kristen Stewart. That is a film all about her persona, her singular presence. That is a major production with a strong female lead. IRMA VEP on the other hand was written in ten days and shot in under a month. It is an ensemble film all about Maggie Cheung. Not meaning that the film is only about her but meaning that its central conceit is that Cheung is our portal into its making.

Coming to France fresh from Chinese cinema, Cheung graceful physical presence, grounds the piece for the audience. Where the script digresses, she pulls it through. Often by simply standing up and facing the events however they play out. From the metamorphosis to Irma Vep, the offset dynamics and the isolation of a star. 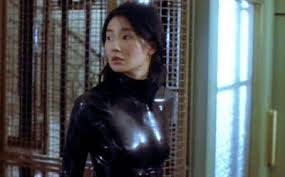 Foregrounding the experience is one thing but then its the touches of the additional players, producers, runners, bit players, which add texture. They fight and flay their arms, lust after and loathe each other. Jean-Pierre Léaud remarkable take on a director, is both funny and caustic. He almost seems to draw out an interpretation of all Nouvelle Vague film makers into a single agent. Though the artifice of the film occasionally slips, it holds up just enough. 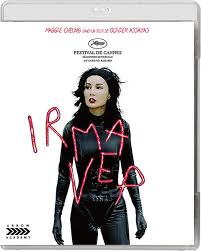 Having never seen the film previously, it is hard to compare. However the 2K transfer keeps some of the grain of film stock without over cleaning it. The silent film stock scenes make the most of the restoration. The commentary by Olivier Assayas and Jean-Michel Frodon sometimes veers into over deference. It does also reveal delicate details of film making hardships. This is revealed in the actual film but Assayas uncovers it in the commentary. The on set film blurs the events so you become confused as to if you are watching the film. This element makes it almost too good not to watch.