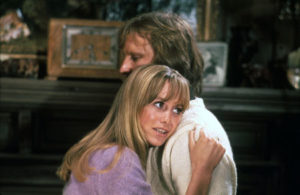 The 1970s saw cinema in this country change exponentially. From the dawn of the decade, to the middle and then its end. American investment had fled, the country was in turmoil and little was around to make money. Television hoped to supersede cinema but cinema still captivated its audience enough. Giving them titlation and terror that was absent from their terrestrial sets. So a slew of British production compaines saw an opportunity. They made films that were lower budget and specifically genre films. They also tipped to the British sensibilites, cultural legacy and some of the humour of the period. Studio Canal bought up much of this after the studios either sold it for much needed capital or were dumped in liquidation claims. I am always astonished by how many film lovies hearld these people, yet also lampoon capitalists and the business of show… FRIGHT fits into this like a hand into a glove. 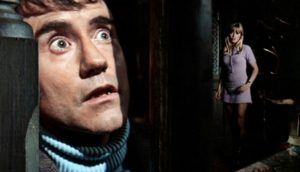 Amanda (Susan George) is babysitting for Dr. Cordell (George Cole) and his wife Helen (Honour Blackman). Their large estate in the woods, is a wierd throwback to the past. A place of nightmares and trees, memories and darkness. She arrives to Tara being told a bedtime tale. Helen and Dr. Cordell leave, in the car the couple mention horrors they want to escape. Amanda makes tea in the kitchen, and thinks she sees someone. The doorbell rings and her boyfriend Chris (Dennis Waterman) at the door. He is excited to see her. She tells him  to wait, while she is looking in on the child. Opening the door to Chris, she is excited. With the child asleep, they can spend sometime together. The two lounge in the frontroom, in front of a fire burning low and sexy, like a dream. However the imminent family return sees Chris kicked out. As he walks away, he is killed and the plot thickens…

So far this month, Studio Canal have released AND SOON THE DARKNESS and now FRIGHT. These could be screened and retilted as Brexit : a retake. One outlines the British fear of the EU and the other, the power of nightmares to haunt are rational thoughts. These films are both acclaimed but in truth they never quite match the acclaim. The first film suffered from being to long, overly forced in terms of cinematics and scripted with often illogical set ups and pay offs. 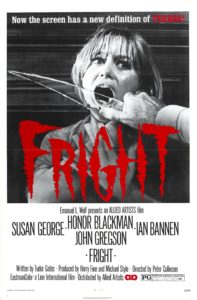 You can read my take on AND SOON THE DARKNESS on this site. FRIGHT is a different beast but one that also has issues. The best points of the piece are George Cole and Honor Blackman. Two actors that reveal a little in the piece. John Gregson as Dr. Cordell is a lovely   treat as well. When he appeared it was met by me with surprise and a little warmth, as he was a lovely actor and man. Then you get to the grit. Susan George. Its not just her flapping, snivelling and whining that are hard to swallow (this is all editing and direction at fault). It is her scream, is at times is claustrophobic, leaving you frightened. Sadly it is over used and becomes painfully irritating. Dennis Waterman is a little sleazy but works for the role. Since he is snuffed out early, I was thankful. The script drags its corpse around for two long. It leaves the body to fester and then seems to miss that it is just going on and on. You can see the Proto Slasher in this baby sitter gets caught up in a maniacs glare but…and I mean a big but. It has been done better and was prior done within a framework like this, to more skill. Films like teh SPIRAL STAIRRCASE for instance. 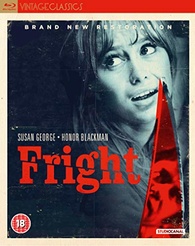