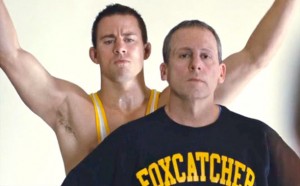 The intensity and curiosity of Bennett Miller’s contemporary masterpiece, Foxcatcher is something so rarely seen in cinema today. To have taken a true story, with all the intrigue and mystery surrounding the real life crime and to have turned it into a compelling, powerful and even imposing piece of cinema, which carefully but assuredly draws the audience in from the very first scene and doesn’t relinquish control until the closing credits. To the credit of the film, there are three major components, which artfully work together to help create an affecting and enthralling journey – the sparse and delicate screenplay, intelligent directing and powerhouse performances from the central three actors; Channing Tatum, Steve Carell and Mark Ruffalo.

Based on the true story of two Olympic wrestling winning brothers, Mark (Tatum) and Dave Schultz (Ruffalo), who are destined to become the best wrestlers in the world – especially Mark, who with his skill captures the attention of an older, wealthy man, John du Pont (Carell). Mark trains by and with his brother but when John flies him over to his lonely but phenomenal estate in the middle of the countryside and explains his fascination with wrestling, he persuades Mark to lead the Foxcatcher wrestling team and train on the estate. It is only later, that Dave and his family (including his wife, played by Sienna Miller) move to the grounds allowing the brothers to once again train together.

There is a sense of repression and sorrow that impregnates every sentence and every motion of Foxcatcher; from Mark’s determination to be the best, his willingness to believe that John wants only to do the right thing for him, to John’s own constant restraint and pain. There is an alarming sense of alienation in these massive grounds, which constantly threaten to swallow up all those that live on them. John’s own relationship with his mother, Jean (Vanessa Redgrave) is strained as she sees wrestling as a lower kind of sport (compared to horse racing, which is where the du Pont’s initially claimed their fame) and Miller constantly manages to allude to so many different potential reasons as to why she seems disdainful towards her son. It comes to a head during one sequence when she is brought to the training gym that John has set up for the team; during a demonstration he gives his back to his student, becoming the one gripped to the floor. The dialogue is simply about the move itself but a conversation is happening between Carell and Redgrave’s eyes, which says so much more about this intense repression that John has felt for years and finally he is able to be himself as he is gripped and held down by a younger, muscular man.

These connotations to homosexuality continue throughout the film and Miller’s camera admires the bodies of the men on the screen, especially Tatum, who burns 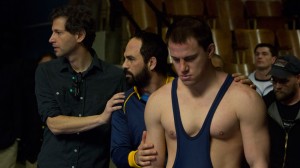 up the picture throughout but it’s during the moments when he is wearing the wrestling singlet and really illustrating the full power of his body that the camera closes in and pushes the audience to form an intimate connection with the character.

Furthermore, the film itself is stunningly beautiful – Miller and his crew have created a film, which alludes to a whole history of cinema. His colours are desaturated and cold, adding another layer of meaning to the story and he appears to illustrate how American’s had felt at the time. More often than not, it’s the silences and the rhythmic muted speeches of Foxcatcher that tell the audience more about what is going through the heads of the characters rather than the dialogue itself. The suspense builds and the audience are compelled to become part of the story and throw themselves into the tension until the shocking and unforgettable final moments.

All three performances from Tatum, Carell and Ruffalo are a revelation – so rarely are actors able to communicate their story through silences and these three bounce off of another at an incredible pace, never allowing the audience to be quite sure who to trust. A special film, which leaves a haunting impression on the viewer after, Foxcatcher is not a film to be taken lightly, but rather marvelled at and studied.