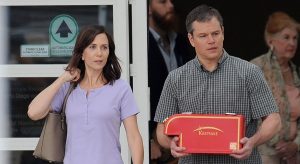 This small sized social commentary is dull, inconsistent and all manner of ignorant. A global revolution in Science allows for the reduction of matter to 1/10000 of its size. Humans begin to shrink on mass, as living and loving is better. Paul Safranek (Matt Damon) has decided that life being large is not all its cracked up to be. So when a chance meeting with a friend, leads him to opt to downsize, all manner of changes are going to happen. 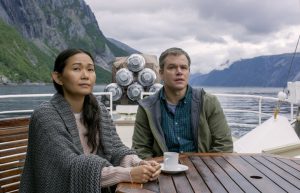 I could say lots and lots and lots about this film. From its star, its subject and even some of its exemplary visual effects. the focus has been sporadic but it seems the director should be the analytical focus.  Alexander Payne has always been the middle class corrector. His best work confronts them head on. Election stood up to those in social progressive places. Those who follow a system and its rules and succeed because they do. He has recently however lost his edge at being a social commentator.

Now he half gets the joke and half gets on board with the people he was commentating on. In Downsizing themes of human environmental destruction, Western consumption and emotional isolation centre its narrative. These are not new but could be caustic for Hollywood and its ilk. 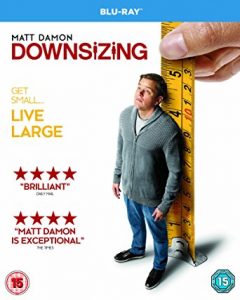 With Downsizing Payne seems to fragment everything he sets up in the premise. Not only missing the mark of tone and commentary but also failing to construct anything tangible. No rewarding charecters, no human feeling. It misses the mark by some way. It is also over long, with scenes running over. Then there is absent direction, with for instance the role of a Vietnamese worker, played with an awful accent and frankly racist take by the actress (nominated for awards even proving that often western voices are comfortable with racism from people from their communities).  Finally the dull script. Filled with average speeches, tired set up and pay offs and a third act that flips around and tiresomely expels its last. In truth, the good ideas the film starts with are emptied rapidly and left on the side.