Our friends at Peccadillo Pictures have been kind enough to offer us another great competition. This time, to celebrate the release of last years biggest and most important gay picture, KEEP THE LIGHTS ON, directed by Ira Sachs (Married Life) and starring Thure Lindhardt and Zachary Booth. This film was a runaway hit both in the UK and USA, being showcased at the 56th BFI London Film Festival and being chosen as a Critics’ Choice at Time Out on theatrical release last year. 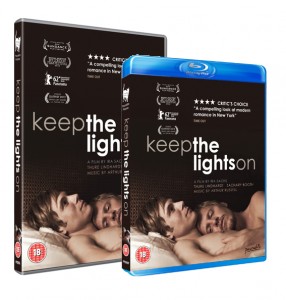 What starts as casual sex becomes a more permanent relationship as they start to build a life together, whilst each continues to privately battle their own compulsions and addictions. Their greatest challenge is down to Paul’s increasing drug use, which threatens to pull them apart and over the years destroy the relationship.

A film about sex, friendship, intimacy and most of all, love, Keep The Lights On takes an honest look at the nature of relationships in our times.

Check out the review of KEEP THE LIGHTS ON, which we did during last years London Film Festival.

Peccadillo have given us TWO copies of the Blu-ray to give away, and all you need to do to bag yourself a copy is answer this very simple question.

Which city does KEEP THE LIGHTS ON take place in?