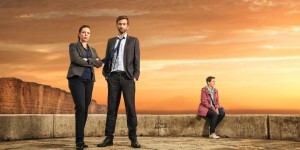 The hugely anticipated final series of the TV phenomenon Broadchurch  arrives on DVD and Blu-ray following its run on ITV. Broadchurch Complete Series 1 -3 Box Set  will also be released in both formats courtesy of RLJ Entertainment’s Acorn label.

Three years have passed in a town that will never forget; but times change. The local newspaper, once the backbone of Broadchurch, is facing closure, and DI Alec Hardy with DS Ellie Miller are about to take on a case that reopens old wounds and divides the town in ways they could never have predicted.

What dark secrets still lie buried in a town that has been so closely examined? And how will unresolved issues around the death of young Danny Latimer finally be settled? The answers lie in Broadchurch: The Final Chapter.

Broadchurch Series Three arrives in both Blu-ray and DVD formats as two-disc sets complete with special features, on 24 April 2017. Also released on the same date will be  Broadchurch Complete Series 1 – 3 on DVD and Blu-ray; with additional content on the Blu-ray release featuring series one audio commentaries and deleted scenes.

To celebrate its release, we have a Blu-ray complete set to giveaway!

What was the name of the American remake of Broadchurch also starring David Tennant?

Competition Closes: 1st May at 5pm