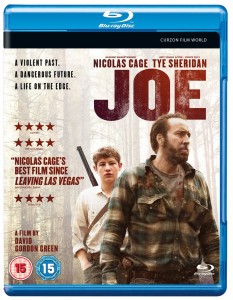 A gripping mix of friendship, violence and redemption erupts in the contemporary backwoods of the South in this adaptation of Larry Brown’s novel, celebrated for its grit and deeply moving core. Directed by David Gordon Green ( Pineapple Express), the film stars Academy Award®-winner Nicolas Cage in the title role as the hard-living, hot-tempered ex-con Joe Ransom, who is just trying to dodge his instincts for trouble – until he meets a kid (Tye Sheridan – Tree of Life, Mud) who awakens in him a fierce and tender-hearted protector.

Joe is out on DVD and Blu-Ray from October 6th.

Curzon Film World have given us three copies of Joe on Blu-ray to give away to readers of Front Row Reviews, all you need to do is answer one simple question.