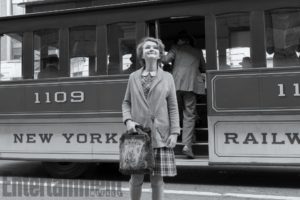 Todd Haynes’ new offering brings the audience into a cinematic world unlike any recently produced. Set in two different time periods, Wonderstruck follows the story of a young boy, Ben, in the 1970’s, struggling with the death of his mother who goes to New York in search of his father. It simultaneously tells the story of a young hearing-impaired girl, Rose, in the 1920’s. The stories intertwine and eventually come together.

Quite like with Carol, Far From Heaven, and Velvet Goldmine, Haynes shows off his directing talent by offering viewers characters that are fully rounded, and performances that stir. The prime example is that of Michelle Williams, as the young boy’s mother, whose screen-time cannot be more than 5 minutes, yet her presence is hard felt. Haynes’ casting of Julianne Moore is as ever on point. But it’s the three children at the heart of Wonderstruck whose performances carry the film.

Adapted for the screen by Brian Selznick, who wrote the book, Wonderstruck, quite like Scorsese’s adaptation of Selznick’s The Invention of Hugo Cabret, brings childlike amazement and innocence to life in a way that transcends typical storytelling. Rose, the young girl, played by newcomer and deaf actress Millicent Simmonds, offers a dimension to the story full of pathos and wonder. Oakes Fegley, Ben, and Jaden Michael, Jamie, the two protagonists of the 1970’s part of the story are equally pivotal to the narrative. Their developing friendship is reminiscent of a coming of age story with both boys having to grow up due to loss of a parent for Ben, and divorce for Jamie.

Ed Lachman’s cinematography, Sandy Powell’s costumes, and Carter Burwell’s score complete this gem. The scene that shows the moment both Rose and Ben, in their respective decades, step foot onto the streets of New York is possibly one of the most visceral, thanks to all three.

To divulge more of the narrative of Wonderstruck would take away from the experience of watching it with fresh eyes. Just imagine that your favorite childhood book has just been brought to life and let Wonderstruck take you on a journey.