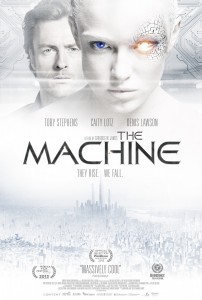 Set in the not-too-distant future where Britain is gripped in a desperate Cold War with China, scientists and artificial intelligence visionaries Vincent and Ava cast away all moral objections and team up to design a self-aware computer brain for an assassin droid that will undertake special ops missions against the Chinese.

As tragedy disrupts their work the intelligence they are developing gains a highly personal element and the lines between human empathy, identity and the nature of consciousness are blurred.

As always there have been a few films released recently with strikingly similar themes and ideas. Like The Machine, Spike Jonze’s Her and the revamped Robocop make very interesting links to today’s world in which advanced AI is not only possible but actually visible on the horizon.

The Machine deserves praise for its engaging and philosophically interesting story and has been described as a ‘successor to Blade Runner’.

Although admittedly sharing certain characteristics with the seminal 1982 sci-fi film – it is set in the future and features androids – The Machine unfortunately falls way short of the era-defining visual excellence of Blade Runner.

Caradog James has intentionally opted for a dark, photographic feel and uses light cleverly in a few of the first scenes. However, the same effects are then used for every other scene throughout the film.

Almost every scene is in extremely clinically lit white rooms or in dark, grey underground labs that give a feeling of emptiness and a hollow element to the film rather than the tense claustrophobia that was probably intended.

The acting performances are also below average and don’t engage the audience or inspire sympathy in the characters. Stephens’ character is an emotionally-challenged perfectionist and work-a-holic who is troubled by his brain damaged daughter. Unfortunately he comes across as wooden, bored and apathetic rather than the complex and morally conflicted scientist he could have been portrayed as. 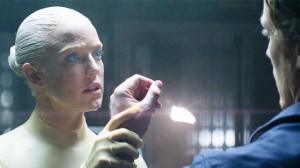 Ava is played by Caity Lotz who fails to inject any subtlety to a dual human/robot role that would be an actor’s dream to play. She fails to convince either as hyper-intelligent scientist Ava or hyper-intelligent android Ava and seems to play safe with a monotone, childlike, pseudo-creepy voice that annoyed me after a while. However, the owner of the monolithic arms company played by Denis Lawson is frighteningly amoral and played well.

The vision and scope of the storyline is ambitious, soulful, terrifying and extremely relevant and the film does explore a dark and very possible future for humanity but the storyline doesn’t flow as well as it could have, the script is poor and the acting is bad.

Whether you like style of the film visually or not is probably more a matter of taste. Many people I spoke to afterwards enjoyed the minimalist, very-dark-or-very-bright, sharp edges, photographic style devised by cinematographer Nicolai Bruel.

I felt it was too harsh and clinical and didn’t give the film the depth that warmer and grainier effects could have done. Even in the dark underground basements you didn’t feel lost in the spaces as the sharpness didn’t leave anything to the imagination.

The original synthy 80s-style score is very good and was probably my favourite part of the film. It really added a deeper spacey retro element.

A disappointingly hollow film, The Machine failed to do justice to a deep and fascinating theme with under-developed and badly acted characters and an overly clinical cinematography.

“THE MACHINE – in Cinemas / VoD 21 March and DVD/Blu-ray 31 March www.themachinemovie.com”