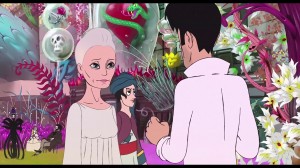 The Congress, a unique dystopian live action/animated sci-fi, is Waltz with Bashir’s Ari Folman’s latest feature, and with it he aims to prove he is more then a one trick pony. The Congress is an ambitious project, as live action come animated films tend to be. The film follows Robin Wright playing a version of herself. In The Congress’s reality, Robin, is notoriously difficult to work with, and as a result hasn’t worked much since her successes as Buttercup in The Princess Bride and Jenny in Forrest Gump had her tipped as the next it-girl.

Following a meeting with her agent, the always brilliant Harvey Keitel, Robin is convinced to sell her digital image to the studio Miramount (an obvious merge of Paramount and Miramax) in exchange for a large sum of money and the promise to never act again, her only demand, no sci-fi, poor Robin. Fast forward twenty years, and we find Robin attending The Futurological Congress, a new animated world run by Miramount’s new technology where people can live out their life as any animated avatar they want. In The Congress, Robin is the biggest star, and Miramount want the right to sell her face to the public.

I won’t delve in to the plot any deeper, whilst its premise is strong, and I agree with the films basic thematic message exploring our 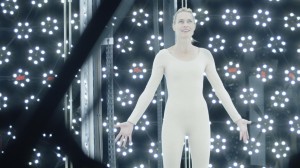 obsession with technology and celebrity and the strain that could have on our society. Unfortunately the film just seems too on the nose with its message, something I felt with Terry Gilliam’s The Zero Theroem as well, and Folman’s movie does feel a little Gilliam in its execution.

The animation is fantastic and strange. Live action/animated films tend to be tricky to get right, with either the animated scenes or the live action scenes feeling hokey or like an afterthought. For every The Phantom Tollbooth there is a Bedknobs and Broomsticks, and thankfully The Congress uses both its animated and live action sections incredibly well.

With an exquisite class including Danny Huston, Paul Giamatti, Kodi Smit-Mcphee and Jon Hamm in a voice performance that will leave you scratching your head and screaming “who’s voice is that?!”. I love Robin Wright, I think she is so powerful on House of Cards at times she upstages Spacey. Here she just felt bland and emotionless, and her voice didn’t lend itself particularly to the voice-acting.

Overall The Congress feels overlong and knotty in places. Whilst its ideas and concept are very strong, it is a little too on the nose with it, and the animated worlds come off feeling a little bit Monkeybone as a result. Ari Folman certainly has a distinct eye for striking visuals though. Both The world of The Congress and the recording of Robin’s image are incredibly beautiful and elevate the film.