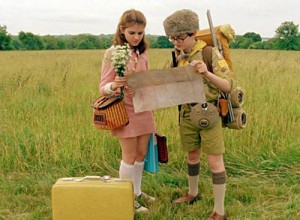 Moonrise Kingdom marked the long awaited return for Wes Anderson, who last gave us 2009’s Fantastic Mr Fox starring George Clooney and Meryl Streep. Not one to shy away from putting all star casts into slightly quirky, and unique situations, Anderson returns with a cast list anyone should be envious off. Starring names like Bruce Willis, Edward Norton, Frances McDormand and Tilda Swinton, Moonrise Kingdom should pretty much tick anyone’s watch list – at least someone from the cast is going to appeal to you and it was marketed as a happy-go-lucky film, a romantic comedy, a surreal laugh – but in all honesty, it fell somewhat flat on it’s face for me.

Despite concentrating in the poster and the advertising for the film on the cast, much of the film concentrates on it’s two young stars, Jared Gilman and Kara Hayward who play Sam and Suzy respectively. The two young actors are taken on a whirlwind of emotions by Anderson, and they deal with them well throughout Moonrise Kingdom, but oddly, I felt somewhat compelled to wish they hadn’t gone on this adventure in the first place. The romantic element that we are told to concentrate on? It’s between these two prepubescent children who have deep, cynical views on the world and appear (because it’s an Anderson film) to be able to philosophise issues away and look further below the surface than the rest of us. The comedy element? If I was looking in the correct place, I think it was meant to be the sweetness of children, or perhaps the ways in which we do things for the person we love, or the blatant disregard for the children’s feelings by the adults but one way or another – I did not laugh. What this film does deliver on is it’s ability to be quirky, in other words, try to be different. It’s colourful verisimilitude screams at the audience, in ways that none of the actors manage to, and in what could be constituted quite dark subject matter – the landscapes remains (un)subtly ironic.

The story follows Sam and Suzy; Sam is a scout at Camp Ivanhoe, which is led by Norton’s character, Scout Master Randy 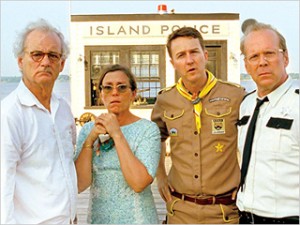 Ward. Randy is an adult, apparently; a maths teacher, or so he says, but instead we are meant to gaze at his childlike abilities to keep control of the children at the camp and instead they run wild around him – I tell you, social services would be on this camp in reality  *Tilda Swinton alert, look below*.

As for Suzy, she lives with her attorney parents, Walt (Murray) and Laura (McDormand) and her three younger brothers. She stares meaningfully out of windows and postulates; Virginia Woolf would be proud. She is the angry little girl growing up, who her parents think causes problems when really she sticks to herself and never causes an issue (unless she is running away with a young boy). Long story short, they run away, they are found, they run away again, they are found – the end.

Performance wise, I was astounded at how these amazing names (yes, even Willis can act when pushed), really came off as boring, one dimensional characters; the studio could have saved it’s money and hired nobodies. There is only one actor in the entire film who I enjoyed watching, and she make two scenes in the film bearable – can we take a moment to think about Tilda Swinton and swoon over her? *Pauses, for a moment before continuing rant*

Had you moment? Good!

Swinton plays a character otherwise known as ‘Social Services’ – whether this was a political point about governmental agendas being nobodies, slates which don’t give emotion and don’t try to help. An empty palate without which anyone can make anything better – who knows. All I know is that Swinton appears in two scenes; one is a call to Willis and Norton to let them know that Sam will be going to juvenile refuge because his foster family have turned him away and a second to actually pick up Sam. She doesn’t take herself seriously in the film, and perhaps, I understand why – had one tried an Oscar winning performance in Moonrise Kingdom, it would have stood out (something which I don’t think you want to do in this film). 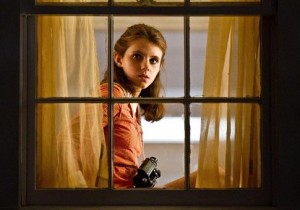 What I will give to Anderson is his clever use of cinematography and colour – no matter how blatant (in my opinion) his use of bright colours juxtaposed with anything else in this film was, he still does it with a flair that only a few directors know how. Although I didn’t enjoy the film, you can certainly tell he knows a lot about the world he is trying to create and really wants to give the audience as much information about said world as possible – he wants the audience to take part with the characters; to become emotionally involved and therefore empathetic to the cause. Parts of the film are viewed through windows, or natural barriers and frames, which place the audience one step further away from the characters and therefore alienates them (both characters and audience) from what is actually going on and what is being felt. This was actually one part of Moonrise Kingdom I found satisfying, as it lead me to actually start to understand what world is being portrayed, but it didn’t go far enough for me.

The film is filled with it’s oddities, but for them, the film was too aware of it and I just came away with a dank feeling. I cared very little for any of the characters and found the children too tainted – this may be me, not fully suspending my disbelief for this film but I couldn’t appreciate children so broken in the world they lived in.