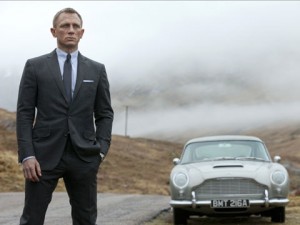 In the immediate aftermath of a cyber security breach, nerdish IT expert Q (Ben Whishaw) informs James Bond (Daniel Craig) that there are only six people in the world who can hack such systems as that on which he is involuntarily typing. Bond replies: “Of course there are.” Minutes later, Bond is in pursuit of the assailant on the London Underground, when Q informs him through an earpiece that his target is disguised as a policeman. Bond replies: “Of course he is.” Both instances sarcastically point to the preposterous narrative tropes (high-stakes exceptionalism, an impossibly resourceful villain, etc.) on which franchises such as the Bond films have come to depend, and indicate a particularly self-conscious streak on the part of Skyfall’s writers – series regulars Neal Purvis & Robert Wade, and John Logan, whose previous work includes Gladiator (2000) and Hugo (2011) – which apparently legitimates plot conveniences such as an otherwise judicious antagonist leaving a door ajar enough for his pursuer to spot.

Bond’s quarry is Silva (Javier Bardem), the fair-headed ex-MI6 agent who was once the favourite of M (Judi Dench). Having survived (and been disfigured by) a cyanide pill after being abandoned in the field by M, Silva is Another Tragic Rogue, a computer genius driven less by megalomania than oedipal jealousies. His camp airs and manic laugh lend his sense of mischief the otherness apparently required of memorable Bond villains. Like Silva, though, Bond has also survived death: in the film’s predictable pre-credits stunt spectacle, he’s seemingly taken out by a fellow agent, also on M’s orders. Such symmetries give the film an unusually inward feel: but for early detours to Shanghai and Macau and a finale in rural Scotland, Skyfall – named after the estate on which Bond spent his childhood – is largely set in London, with a plethora of nods to previous Bond films heightening its navel-gazing scope.

The occasion for this referential framework is the Bond films’ 50th anniversary, and the emphasis upon Dench’s M is due to her having mothered two incarnations of 007 over what is now seven films. Extending M’s character in hitherto unthinkable ways (we see her at home, learn of a deceased husband, see her join Bond in the field), Skyfall’s nostalgic experimentation appears like a follow-up to the equally surreal sequence in Danny Boyle’s Olympics ceremony, in which Craig’s Bond piloted the Queen onto centre stage. Furthermore, the constant misfires on display here – the sniper shot that takes Bond out in the first sequence, M’s backfiring decision-making, Bond’s own less-than-perfect marksmanship – might be a reference to the critical failure of Quantum of Solace (2008). Perhaps in conscious response to that film’s incoherent rubble, Skyfall is about making things right after royally messing up. Like a calculating political campaign, its packaging is based less on its own innovations than an attempt to avoid the calamitous demerits of its predecessor. To this end, Bond films double as a self-fulfilling focus group session for the next instalment (“James Bond will return”), and the latest film is a conscious and earlier-than-expected revamp designed to retroactively declare Casino Royale (2006) a false start while indirectly apologising for the utterly forgettable misstep of Quantum of Solace.

Just as Casino Royale took its origin cues from Batman Begins (2005), Skyfall exploits the traits of the post-Nolan action epic, continuing for instance the new trend of establishing shots that Christopher Nolan’s Batman trilogy has helped make popular, with its ominous aerial progressions over cityscapes and a shot of its protagonist standing atop a building surveying his domain.Moreover, like that of The Dark Knight Rises, Skyfall’s hero neglects his talents in self-exile, returns creaky and dishevelled, and races to sharpen his nation’s siege mentality and spearhead its defence against the forces of anarchy. (The films also share a line of dialogue: “A storm is coming.”) Silva is caught by Bond midway through the film, only for such a narrative twist to have been part of his master plan all along (to paraphrase Bond, “Of course it was!”). Like Heath Ledger’s Joker in The Dark Knight, Silva poses a kind of personal threat to our hero, representing the flipside of his personality: without the security of institutional employment and the affections of Mommy Dearest, all-out destruction reigns.

Some have called for Nolan to be put to work on the Bond franchise, but on this evidence, the series is better served by Sam Mendes, whose visual palette is far more interesting than Nolan’s. Working again with cinematographer Roger Deakins, Mendes aestheticises mayhem and frames silhouettes against fiery backdrops: the film’s climax recalls images from Jarhead (2005), on which Deakins also worked. If Nolan’s Inception (2010) paid homage to Bond films such as On Her Majesty’s Secret Service (1969), meanwhile, Mendes’s more attractive mise-en-scène doesn’t quite reciprocate. Rather, Skyfall’s visually varied episodes make a tie-in console game easier to imagine: you can picture playing out the film’s setpieces in first-person shooter mode, such as that spatially disorienting but colourfully bedazzling scene in a Shanghai skyscraper, or an against-the-odds fight in a casino basement inhabited by two komodo dragons, or the climactic shootout at the eponymous mansion, which recalls Nazi Zombies, the minigame that featured on Call of Duty: World at War…

Such tie-ins are an inevitable feature of one of the cinema’s most commercially marketable products. Bond himself now guzzles Heineken, taking manly sips in post-coital half-nudity that has less to do with allowing Craig to make the role his own than designing Bond as a blank canvas on which products may be advertised for a presumably hefty fee. As such, Craig’s steely pout and weather-beaten face directly sells a fashionable machismo – clean but unshaven, he looks like a Debenhams model – but he remains too implausibly and conspicuously bulky to be an international man of mystery. But then, was Bond ever about espionage in the first place?

‘Skyfall’ is out at cinemas now. This review was originally posted on 27 October at idFilm.