Sheffield Doc/Fest Twenty – Smash and Grab: The Story of the Pink Panthers 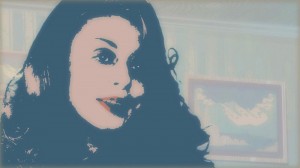 A story that sashays across Europe and beyond, from war-torn Yugoslavia to the sparkling jewellery shops of Geneva, Antwerp, Biarritz and Dubai, this factual gangster movie is a born crowd-pleaser and enjoys considerable support from sponsors and production companies all too aware of its appeal.

The smooth efficiency of the Pink Panthers’ operations seems to have permeated through the film, from the slick story-telling to the seductive PR operation. Powered by amaretto, Smash and Grab is being taken around the world as they try and build up the film’s profile before it is aired on BBC Storyville in the Autumn.

Their partnership with Disaronno seems a match made in heaven and one can only imagine the excitement in both parties’ press teams as they realised the marketing possibilities of a gangster documentary watched by an audience plied with amaretto sours.

It seemed fitting to be drinking free cocktails before a film with serious crime credentials and the pre-premiere drinks was a very nice touch, maybe the free bottle of Disaronno on each seat was greasing the palm slightly but how else are you going to toast the Panthers successes with a triumphant ‘na zdrove’ during the film?

The film itself was enticing, detailed and made an effort not to fall into the trap of cashing in on the gangster element too much. The Pink Panthers’ creation in war-torn, sanction-ridden Yugoslavia was explored at length and for me was the most interesting part of the story. The General Tito years were swiftly yet comprehensively explained with amazing archive footage found in a ‘rotting building in Belgrade’, as the director explained afterwards.

The dissolution of Yugoslavia following Slobadan Milosevic’s appointment and the desperate Serbian cruelty in Bosnia and Croatia led to international sanctions and in turn led to an explosion in smuggling carried out by an unemployed generation deprived of normality, trying to escape the barbarity of the war.

“This was the start of the Pink Panthers,” explains ‘Mike’ the male Panther interviewed in the film and who, along with the female interviewee ‘Lela’, gives the film its credibility. As the names, faces and voices had to be changed Mike is played by a Balkan musician living in London called Tomislav Benzon and for someone with no real acting experience he gives a very good performance as a loveable diamond thief.  Jasmin Topalusic’s performance as ‘Lela’ isn’t as strong but the animation techniques used to present the two criminals hides this well.

The innovative and extremely effective idea of animating the Panthers’ interviews succeeds in acknowledging that their identities have been hidden – normal footage of an actor talking could have caused confusion and affected credibility – but also allows the audience to use their imagination to build a picture of the real person, as well as creating a gorgeous stylised effect that is a pleasure to watch. The technique used is called rotoscoping, where every frame is traced over by hand, famously used in films such as A Scanner Darkly and Waking Life.

These shimmering, colourful representations of ‘Mike’ and ‘Lela’ explain how they fell into a life of crime, through smuggling and glamorous boyfriends, and explain the methods they used to scope out potential targets and eventually smash their way into vaults where the loot lay hidden.

They give detailed accounts of two heists, one in Spain and the other in Dubai, where impressive CCTV footage shows the smash and grab technique that gave the film its name, and unintentionally gave Audi a reputation for strong, reliable cars in the Emirate.

Other voices in the film are not acted and include those that have made a living following the Panthers around Europe. Investigative journalist Milena Miletic was the key for access to the Panthers for Havana Marking and along with Swiss detective, Inspector Yan Glassey, they give candid accounts of their fascination and admiration of the gang’s operations, as well as stern-faced warnings of their inherently criminal nature. 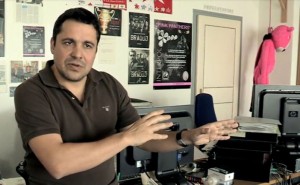 The film has chosen to be sympathetic to the Panthers without a doubt, but I wonder how much of a choice the director had when even the police have a twinkle in their eye when they’re talking about the jewel thieves. The interview with Inspector Glassey takes place at his desk in front of a large cuddly Pink Panther that has been hung by a gibbet erected in his office, and despite explaining that they break the law and routinely carry guns he is jovial about their success, smiling happily throughout.

‘Lela’ is almost the most critical voice of them all and her story as an incredibly attractive woman that is used to scope out jewellery shops leads to alienation and depression as the forced ‘transformations’ and disguises makes her feel like ‘someone’s doll’. She eventually escaped back to her village and has found religion.

More could have been done to interview jewellery shop owners and workers who have been caught up in a Panther raid. Some of the CCTV footage shows terrified cashiers cowering in fear as they are faced with masked gunmen and a robbery in Tokyo involved the use of tear-gas on shop workers which proves that the crimes are not completely victimless.

The Panthers have recently recommenced their role as Robin Hood media darlings after being accused of stealing £656,000 worth of jewellery from a hotel in Cannes during the film festival this year; taking jewels about to be worn by Carey Mulligan and Cheryl Cole! However, it must be said this robbery is still under investigation.

On a darker note, as the director explained afterwards, their policy of ‘no violence, only intimidation’ could have been broken as they may have killed a security guard since the film has been made.  She is considering putting in a note explaining this recent activity in the end credits.

All in all though Smash and Grab: The Story of the Pink Panthers is a very well made, exciting and incredibly interesting documentary that, because of the shiny subject matter, will appeal to all.

I’m sure it would be as enjoyable sober but amaretto sours are highly recommended as the perfect accompaniment.