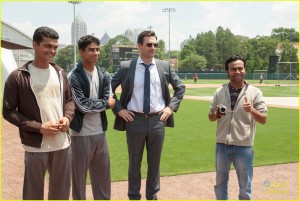 Jon Hamm plays JB Bernstein, a sports agent down on his luck. After falling asleep in front of the television and awaking to a game of cricket, he comes up with the brilliant idea of launching a nationwide competition to find the next big Major League baseball player… in India.

On the surface this has all the makings of a Slumdog Millionaire meets Jerry Maguire, but it sadly isn’t either. We all know Jon Hamm as Don Draper in Mad Men, a role he plays to perfection. He is as watchable in this film, but in a way as detestable as Don.  The man does have great hair though!

The script is the main problem for this film.  Million Dollar Arm isn’t a mindless action flick, it’s a character-driven one, thus needed a strong script. The struggle and arrogance comes from the representation of India and its people. From the bumbling, head-tilting assistant to the American idea that all people not in their country need saving, Million Dollar Arm occasionally even falls into Crocodile Dundee territory.

After the search in India concludes, two lucky boys are flown to Los Angeles to learn the art of baseball and have the team scouts marvel at their skills. Comedy, misunderstandings and shock at the modern world ensue. The boys are of course not very good at anything more than throwing.

The performances are great all around. From Hamm, to Bill Paxton, Alan Arkin, Suraj Sharma and Madur Mittal, they all add a little depth to this otherwise light ensemble piece.

As with all American movies, a love story forms a little sub plot to keep viewers entertained. The ever-wonderful Lake Bell plays the love interest. She rents JB’s guesthouse and serves as the person who softens up JB.

It’s all quite cliché and watchable. But it’s not great.  The saving grace comes at the end when one of the players shows he has more integrity than the rest of the characters. Watch without expectations and you’ll hopefully not regret those two hours.