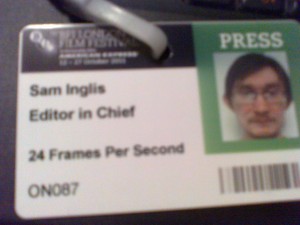 My LFF Press Pass. Currently the coolest thing I own. By far.

Some of you may have spotted a slight error in this article’s heading, namely that this year’s London Film Festival begins on October 12th. This is quite true, but for me and the rest of the press contingent it has already started, with two weeks of press screenings before the main event. So, for the next month I will be here bringing you brief daily thoughts on the films I see (hopefully around 80 titles this year), interviews I do and other general festival stuff. Hopefully I can give you a flavour of one of the world’s finest film festivals.

Anyway, for the first couple of weeks we’re based at BFI Southbank. The first day revolved around seeing old mates you haven’t seen since last year’s festival and putting faces to critical names you know but haven’t met yet. Oh, and some movies too. 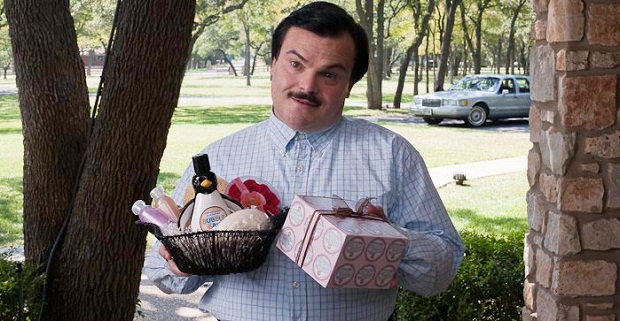 The prolific Austinite director’s latest is a true story from his home state. Jack Black plays Bernie, an assistant funeral director who is so generous that he becomes a real hero to his community and, when he commits a terrible crime, they rally around Bernie.

For a film about a pretty awful crime, Bernie is perversely sweet and warm and enjoyable, and that’s thanks to Linklater’s amused but respectful handling of both the events and the town and people of Carthage, Texas (many residents play themselves in very amusing interview scenes). The gently comedic tone of the film perfectly suits the outwardly gentle character of Bernie, and Black’s excellent performance. Black is very different from his normal persona here, reining in his usual excesses for a more subtle (and, on reflection, more layered) piece of acting than he is usually required to deliver. Also delivering his best work in some years is Matthew McConaughey, who is excellent as the ‘asshole’ DA.

Bernie isn’t Linklater’s best or deepest film, it hasn’t the resonance of a Before Sunset, for example, but it’s a fine entertainment with a couple of real standout performances, and it was a nice, easy, start to the festival, just the tonic for a Monday morning.
3/5

Junkhearts boasts a couple of fine performances; one from well regarded character actor Eddie Marsan as Frank, an ex-soldier with PTSD and another from newcomer Candese Reid as Lynette, the young homeless girl who completely takes over his life after he helps her out one day. Unfortunately these performances are wrapped up in a movie that proceeds ever further down the most predictable and hackneyed path possible, resulting in a narrative that plays more like a checklist of British misery drama clichés than an involving story.

Everyone but Frank is a stereotype, especially the male friends of Lynette and her boyfriend (a one note Tom Sturridge) who show up in the film’s second half, and send it careening ever further off the rails. This renders Junkhearts even more boring than it would otherwise be, because you never feel like any of these people are anything but cardboard mouthpieces. There are some good moments, especially the film’s opening shot, but they are overwhelmed by things like the appalling end of act two montage that shows that Frank and Lynette are still thinking about each other, the film’s apparent contention that crack addiction can be cured just by taking someone out of a flat, and the lack of credibility behind the central relationship.

Junkhearts should be good, and it could have been, but it just doesn’t ring true.
1.5/5

I was disappointed by this drama about a recovering drug addict on day release from rehab. It starts quite well, with a silently evocative opening sequence that set the tone for the film, and continues to be engaging as the protagonist, Anders (Anders Danielsen Lie) visits an old friend in the morning of his free day in Oslo. Unfortunately the film begins to slip from there as (fine as Lie is in the role) Anders never really develops a great deal of personality, indeed he’s almost a blank slate and, in a film that is so completely focused on his character, that made it very hard for me to really engage with any of what he was going through, especially as, in its second half, the film began to tick over in a very predictable way.

There are nice moments; a well observed cafe scene which reminded me a little of Before Sunrise; a lovely shot of Anders and some new friends riding bikes together, cycling through clouds made as one of them shoots off a fire extinguisher and the opening 30 minutes or so all work rather well. For me though, it doesn’t work because not only is it always obvious where the film is headed, Anders isn’t full or interesting enough for me to really care to go along for the ride. If you buy into the character though you’ll likely love Oslo, August 31st.
2.5/5