I Am Nasrine Review 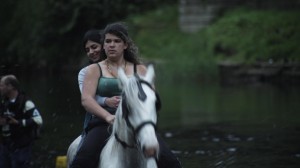 Written and directed by British/Iranian film-maker Tina Gharavi, this beautifully shot film about an Iranian girl who is forced to flee Iran and start a new life in the north-east, is a low-budget success story.

Nasrine, a happy, intelligent girl of 16, is brutally sexually assaulted by the Iranian police after being arrested for riding on the back of a boy’s motorcycle. Her father decides to send her out of the country for her own safety and she is smuggled out with her older brother, Ali.

They arrive in Britain, in the shadow of the Angel of the North, and attempt to settle into British life in South Shields in the north-east. While their case for asylum is decided over a matter of months they are not allowed to work, but they can study, so Nasrine joins year 11 in the local school.

Unexpectedly nominated for a BAFTA for Outstanding Debut, this film could never have been made at all if the filming of the opening sequence had been rumbled by the Iranian authorities.

When approached by the police and asked why they were filming a male producer had to step in and convince them that they were shooting an Iranian TV programme, piggy-backing on another shoot down the street. The real director was forced to pretend to be a bystander. The film was then smuggled out of the country, echoing Nasrine’s journey, and the rest of the film shot over here.

The clandestine beginnings for this film tell its own story of how repressive Iranian society is today. I Am Nasrine focuses on probably the most galling and high-profile form of repression in its opening sequences, the discrimination against women.

Throughout, the film is beautiful, and the themes of freedom, independence and youthful adventure and discovery are wonderfully portrayed. Horses play a big role in the film; while Ali and Nasrine tentatively shop in the local grocers for the first time Nasrine is distracted by a whinny and, peeking round the corner, she sees a girl riding a horse and trap through the streets.

This is obviously not a normal part of urban British life and it is important to note that the director has consciously chosen to not make a hard, gritty film about the hardships of an asylum seeker’s day-to-day life. She has made Nasrine and Ali’s voyage of discovery a very innocent, dream-like and unique one.

Nasrine meets the girl with the horse and trap at school and they become friends. She skips school with Nichole, a traveller kid, and spends time on site with Nichole’s family. A lot of the film is made up of dreamy, idyllic scenes of a wide-eyed Nasrine learning to groom horses, putting on make-up, having fun with Nichole and being fully accepted by this traveller community.

This is not the normal, real-life, experience of asylum seekers, as many at the Q&A session pointed out afterwards. Their lives are riven by worry over hearings, tribunals, food vouchers, the necessity of illegal work, racism and poverty. The film does portray Ali, a serious and shy older brother, finding work in a carwash and a takeaway illegally, but the day-to-day lives of the pair are not looked into in detail.

The racism and distrust from their neighbours in the tower block they live in is portrayed however, which serves to highlight the complete welcome they receive from the travellers, who are outcasts themselves.

There’s a wonderful scene where Nasrine is given a ride back to her block from Nichole’s older brother on his trap with a barrel of paint to spruce up her flat. As they pull up outside the locals are gobsmacked and one of the most bigoted neighbours could do nothing but circle the horse, staring at it as if a Ferrari had parked up.

The soundtrack is decent, some of the dreamy traveller scenes and the early scene of the brother and sister escaping through the Iranian mountains are wonderfully set to Mogwai and original music of similar depth. It’s a bit of a shame that the scenes of Newcastle night-life are set to The Editors at least three different times, but I suppose it gave the jarring effect the director was going for.

Richard Bailie, the producer that was taking the questions after the film, explained that Nichole and her family were a real traveller community. They came across them in the area and immediately decided to involve them in the film. Apparently Nichole actually rides around Gateshead in a horse and trap!

Interestingly, he explained that Nasrine’s friend and confidant was initially going to be an older woman. But as soon as they met Nichole, who was 14 at the time of filming, they realised that she was perfect for the role.

He also explained how low-budget films like this are shaped by the problems they come across and have to adapt as they go along, but on the other side of the coin there is the possibility of chance encounters that can then change the direction of the film for the better. If they’re prepared to be flexible then unexpected discoveries can be incorporated into the film as they go along.

A lovely film to watch, I Am Nasrine has overcome many obstacles to even exist, let alone be nominated for awards. A story of youthful discovery and fairy-tale escapism that sobers up into a darker tale of healing and adapting to new environments; it is a beautifully-shot gem.

I Am Nasrine is officially released in June for Refugee Week but there are special screenings coming up on 20th April at Tricycle Theatre, London and Oxford Picturehouse (plus Q&A with lead actor Shiraz Haq); 21st April at Bath Picturehouse and 27th April at Tyneside Cinema, Newcastle.