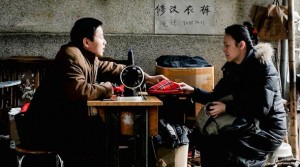 That Shanghai-born writer-director Liang Ying’s fourth feature in six years has proved to be such a persistent thorn in the Chinese government’s side is telling of the film’s cultural and political importance – and, perhaps, of the director’s current standing as a significant cinematic voice. After When Night Falls premiered at the Jeonju International Film Festival in South Korea around this time last year, the Chinese government tried to purchase its copyright in order to prevent further international exhibition; the director, his wife and their families were harassed and intimidated by police visits in order to deter worldwide sales. Why all the fuss?

Bookended by astonishingly matter-of-fact narration over a succession of still photographs, When Night Falls is a fictionalised account of the 2008 incident in which Yang Jia, in his late-twenties, was convicted of stabbing six police officers to death, after his attempts to pursue justice for having been beaten while previously in police custody for riding an unlicensed bicycle had been persistently denied. In the immediate aftermath, Yang’s mother Wang Jingmei (played here by An Nai) was taken by authorities to a mental hospital to sign documents, the legal implications of which she was not informed; later in the year, while his mother tried to wrangle free of the legal binds she’d had enforced upon her, Yang was executed by lethal injection.

On the one hand, Ying approaches this story in an oblique fashion, in that neither Yang’s first arrest nor subsequent attack is covered (Yang remains literally and dramatically voiceless, but for the presence of a RoboCop 3 poster on his bedroom door), though on the other his narrative concentration – upon the 48 hours or so following Wang’s own release from custody at the hospital – allows for a direct assault on the procedural inadequacies of China’s judicial system. As one character puts it, “the legal system itself is committing crimes these days.” 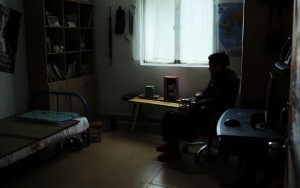 In a crucial, lengthy scene, Wang and those few activists who are trying to support her cause (which isn’t to refute her son’s attack, but to ensure that the preconditions of a fair judicial process are respected) stands before a two-man committee of alternate judges; Ying shows the cold, hostile courtroom from two vantage points: from the back, so as to include himself alongside these people against two near-faceless individuals, and from in front of Wang so that she appears to be a defendant herself.

Ying, an apparently prodigious filmmaker at thirty-six (note that eerie sonic crescendo in the film’s final and best scene), concentrates on the almost-bureaucratic grind against and within which Wang must operate in order to seek some kind of lawful fairness on behalf of her son. Trudging through early frames somnambulantly, she seems to grow in confidence as the film develops – which only adds to the futility of her quest and the outrage we come to feel on her behalf. The underlying tragedy here isn’t just that the government has murdered a lad for reportedly killing six of its policemen, but it’s also that the state apparatus is built upon endemic and dehumanising corruption in the first place. For the forces that have threatened Liang Ying and his family (now located in Hong Kong) since this film premiered in Jeonju (before it took awards from Locarno Film Festival last August) are the same forces that have created and/or reinforced those social conditions that led to Yang Jia’s arrest to begin with.