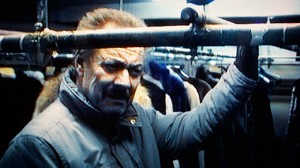 Retired detective Roland Hassel (Lars-Erik Berenett) makes a phone call from a convenience store to enquire about the $8 million reward that is still offered for solving the 1986 assassination of Swedish Prime Minister Olof Palme. With quiet resolve and deadpan certainty, Hassel points out to the poor bureaucrat on the other end of the line that “according to the consumer price index, it should be $13 million by now”. Unsurprisingly, our protagonist is fobbed off, his purpose petering out. Dogged from the off, he continues on his way, having been tasked with investigating the few concrete details pertaining to that fateful evening.

As a film about someone probing an issue that nobody wishes to remember, or from which everyone else has seemingly moved on, Roland Hassel (Hassel – Privatspanarna) has a suitably fuzzy visual texture. Shot on S-VHS, Måns Månsson’s hilarious lo-fi charmer is all about the perils of being rendered obsolete. At its centre is Roland Hassel, the fictional TV detective who first appeared on Swedish screens in 1986 (played by Berenett), and who is one of seven retirees who comprise the Swedish Handgun Association, whose members wish for their 75th anniversary to re-enact Olof Palme’s kerbside murder 26 years after the event. Hassel is elevated from the outset to title-status, of course, which appears increasingly absurd as he begins to blend in more as a witness to events rather than a participant within them.

Possibly taking its cues from the Romanian New Wave (its attention to the inconsistencies of history recalls 2006’s 12:08 East of Bucharest and its grainy video aesthetic resembles 2011’s Adalbert’s Dream), Hassel is a bizarre and original work, which unlike its pensioner protagonists never comes close to outstaying its welcome. Tonally elusive, it begins with seven fellas sitting in a drab office discussing the practicalities of an “escape hood”, for use against gas etc., and it unfolds as a low-key comedy of errors in which minutiae form the backbone of reliving the past and of returning to national trauma.

Key scenes are farcical in length. Rehearsing Palme’s shooting in a gymnasium, Roland and pals argue over likelihoods and variables – the timing of gunshots, the way in which Palme and his wife fell to the ground; Roland has an amusing intensity when he comes up against the red tape of a legal adviser (“…how can anything be more important than this?”); a small quarrel threatens to break out over a discrepancy between the semantic meanings of “moved” and “fluttered”, and over the escape route used by Palme’s assassin (stairs, elevator or escalator?).

The film’s funniest scene, though – one that might best encapsulate its dual theme of technological advancement and the slipperiness of truth – appears just before the lengthy and comically banal conclusion: Roland attempts to book a wheelchair-accessible taxi for fellow retiree Sven (Sven Anjer) on a speaker phone, navigating his way through the pre-recorded audio menus with stuttered success. Cut to that unexpectedly poignant sequence, of the taxi ride itself, to the tune of Tina Turner’s “What’s Love Got to Do With It?”