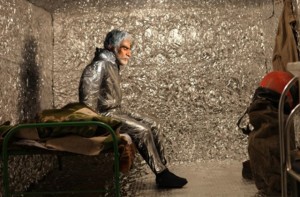 With a distinctive opening and an almost transcendent closing shot, Iranian writer-director Vahid Vakilifar’s second feature (following 2010’s Gesher) is an original and oddly striking sci-fi film that harks back to the likes of Solaris (1972) and 2001: A Space Odyssey (1968) while remaining within the refreshing realms of low-budget utilitarianism. Put another way, one can imagine the director drew what plot he could from his immediate surroundings, determined to shoot a film inspired by and anchored very much to everyday present Tehran, but seeing in it much scope for an imaginative reconfiguration.

And so we have Mohammad Rabbanipor, a lonely creature whose sparsely furnished cabin is lined entirely in aluminium foil, and who spends his evenings searching for and destroying clients’ cockroach nests. Because our protagonist’s interaction with others is minimal, and because what we take to be his daily ritual unfolds in one-take longueurs, it’s a while before Taboor makes any sort of narrative sense. It isn’t until thirty minutes into the film that we hear its first line of dialogue, for instance: heard off-screen while a lump of raw meat slowly sizzles on a heated surface, Rabbanipor is told that the skin condition by which electromagnetic waves dangerously raise his daytime body temperature is worsening. In the subsequent shot, he sheds a slow tear; has he been diagnosed with a death sentence? For the rest of the film, he sprays for bugs, visits a dwarf for some kind of medicinal purpose, enjoys a ride in a virtual simulator, rides home on his motorbike (with sidecar), prepares himself for the coming dawn…

On one level, as an exploration into science fiction, Vakilifar’s film impresses in its emphasis on atmosphere, most of which is down to Hossein Mahdavi’s expert sound design, a mixture of low hums, distorted room ambience, distant elevator music and underwater rumbles. Indeed, because each scene unfolds at the same languorous pace – where, say, the introduction of new narrative information must fit into Vakilifar’s persistent vision, rather than the other way round – the sound design becomes a kind of aural equivalent to the Kuleshov effect, whereby otherwise blank onscreen incidents are imbued with otherworldly suggestions.

On another level, however, as a deadpan comedy of errors, Taboor pays homage to the aforementioned Tarkovsky and Kubrick films perfectly aware that its modest production scale can’t quite match their philosophical pretensions. To begin with, we have a transitional shot from the vantage point of a vehicle moving along motorways, like that weird earth-to-space sequence in Solaris, only for said vehicle to momentarily park up so that its driver can offer assistance to a broken-down roadside car. Elsewhere, a beautifully contemplative shot of Rabbanipor overlooking Tehran at night is undercut when he decides to take a rooftop piss, the audible squeaks of his jumpsuit lending farce.

There’s a fine line between inspired and indulgent, however (and an even thinner one between mysterious and dull), and the film isn’t quite as profound – for want of a better term – as its makers seemingly wish it to be. At a slight 80 minutes, Vakilifar’s film boasts one arresting composition after another – and Mohammad-Reza Jahanpanah’s cinematography is exceptional – but to what end? Still, if Vakilifar’s wish was partly (or largely) to fashion an almost hallucinatory filmic space out of a Tehran that might otherwise resist all notions of science fiction, then he’s done a pretty impeccable job.