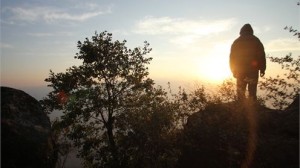 In more ways than one, Penumbra is late to the party. With its protracted pans and incident-free longueurs, it might be seen as a stylistic continuation of ‘slow cinema’, whose death agony was more or less diagnosed by Sight & Sound editor Nick James during and after this year’s Cannes Film Festival. Furthermore, with its docudrama feel and days-in-the-life look at Adelelmo (Adelelmo Jimenez), a hunter who lives with his wife (Carlota Rodriquez) in virtual solitude in rural Mexico, the film is a humble retreat from the burning issues currently facing Mexico’s urban centres. Suffice to say, then, urgency is not its suit.

There’s very little to say about Penumbra without reproducing its own elusive qualities. Shot on 16mm (which in itself says something about obsolete technologies and outmoded ways of life), it opens with a simple leftward pan that becomes a twice-around circle of Adelelmo’s rickety abode at dawn, gradually lightening as the hunter gets up to leave his snoring wife at home and to venture into the surrounding locales to fish; later the same day, Adelelmo hides behind clothes hanging on a washing line to scare his wife with the day’s catch. With this simple routine established, the film later sees our modest protagonist call at neighbour Toribio’s home and undertake another hunting trip at dawn; experience (or suffer) a dream sequence; recall memories of his dead son Emiliano.

With vague echoes of Argentine filmmaker Lisandro Alonso (specifically, his more engagingly enigmatic and effortlessly intense films La libertad (2001) and Los muertos (2004)), Penumbra is one of those films that aim to match the rhythms and pace of their protagonist’s everyday life to an almost ritualistic degree. Director Eduardo Villanueva provides intermittent flourishes: Adelelmo’s dream sequence in particular is a suggestive and eerie interruption to the otherwise unhurried speed. Unsurprisingly considering its title, there is also frequent experimentation with light: the film begins in darkness and gradually becomes lighter, while Adelelmo is forever fiddling with flickering or broken bulbs; the film’s finest, most haunting shot is of Adelelmo and Toribio negotiating barely-visible terrain, their torch-carrying figures silhouetted against an approaching dawn. (Also impressive is that scene in which droplets of rain drip into the house with syncopated polyrhythms after a downpour, creating a kind of interplay between the natural world and makeshift protection against it.)

Like its clichéd use of Arvo Pärt’s music over its end credits, though, Penumbra’s evocation of “the loneliness of the countryside” (as referenced in an old telegram from Emiliano) is prone to those familiar shorthands that sketch out a life lived off the fat o’ the land. Not surprisingly for a film about a hunter, there are almost fetishistic scenes here of Adelelmo skilfully preparing a deer he has just shot for carrying home (and then later gutting it), and there is also the obligatory hen-wringing scene that seemingly must feature in any film of this ilk. Penumbra, then, is not a particularly interesting film (though there is an earthquake) – though it is not without signs of directorial promise.