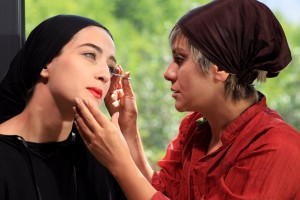 At the present crossroads, the conditions under which Iran’s national cinema is being made (or not being made, as is often the case) are as worthy of analysis as the films themselves. Precisely because Iranian filmmakers are currently under threat of artistic censorship and/or legal restriction (such as house arrest or even a prison sentence), however, their output has enjoyed an unquestioned critical status, as if an artist working within and against such suppression is by default a genius. As Jafar Panahi’s This Is Not a Film demonstrated last year, though, courage is not equable to insight. Condemnation of a political regime does not therefore preclude criticism of the art conditioned by it; for too long now, Iran’s more internationally celebrated filmmakers have, for numerous reasons, misplaced their focus and/or shirked the grander questions facing them.

In the case of Mania Akbari’s latest work From Tehran to London, it’s unlikely that anyone will see the film without prior knowledge that only half of it was completed. It opens with a dedication to “all the filmmakers in Iran, who have served a prison sentence and the ones who are still in prison”, and toward the end of its 45 minutes the director herself tells us in voice-over that production was stopped after crew members were arrested; to begin with, Akbari had never been granted permission from the Iranian government to make the film. While it’s important to draw attention to this continually criminal administration, the fear is that the film itself is consequently celebrated as an inherently perceptive work.

This is not the case. From Tehran to London, originally titled Women Do Not Have Breasts, unfolds as a series of conversational exchanges between a petty bourgeois couple Ava (Neda Amiri) and Ashkan (Bijan Daneshmand), living in their plush home on the outskirts of Tehran, and their housemaid Maryam (Elahe Hesari) and Ava’s sister, Roya (Akbari). The film’s single-take set-ups will be familiar to those who have seen Akbari’s notable debut 20 Fingers (2004), as will the kind of talky intellectualising and cerebral but tempestuous self-assessments with which its characters converse. Sourness is never too far away. 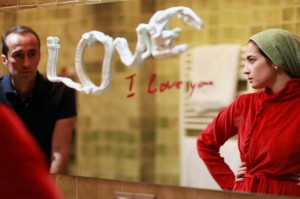 20 Fingers starred Daneshmand and Akbari as the often-bickering couple; here, Daneshmand and Amiri, both playing artists, talk through their trivial problems while getting ready for an evening out in their spacious bathroom (“can you flush after you piss” / “you don’t even put the toilet seat down”). Outside, meanwhile, dogs bark and thunder rumbles, both of which contribute to the general claustrophobia, heightening tensions while providing sonic evidence of this couple’s walled-in seclusion. As characters talk over one another, that too-easy conversational claustrophobia begins to grate, and the irritation that stems from being made witness to the daily travails of pretty unpleasant folk – which also pervaded Kiarostami’s Ten (2002), in which Akbari acted – sets in to linger like an odious stench.

Perspective is everything. As one character notes, “sometimes people are so close that they cannot see each other”. But from this mannered swamp, a question emerges: what insights are we meant to draw from an artistic representation such as this? That men are shits and that Iranian society is patriarchal? At least one of those true, but is it not possible that Akbari’s own narrow perspective prevents her from seeing (let alone analysing) the material social conditions by which this might be the case? As it is, From Tehran to London’s problem is fundamental: it was an incomplete picture long before it became a “half-finished film”.