How do you get a handle on London – an unknowable land burdened by history and buffeted by change with seven million strangers all vying for attention. The answer: be a private eye who watches and waits for the telling detail that will shed light on this metropolis. In these three films Chris Petit investigates the inner life of London. 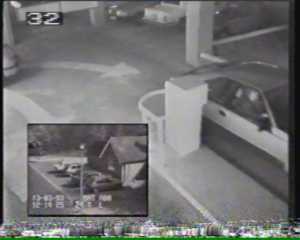 Surveillance is a mini film-essay made up of CCTV footage. With Petit’s voiceover we explore the strange hold exerted by this format, its crumby video images oddly framing empty landscapes where the only indicator of time passing is the digital numbers that tick over in the corner of the screen. Despite the sinister presence of these cameras Petit compares their recordings to the dawn of cinema when it was enough to simply watch a single static shot and be overwhelmed by this new technology. Petit also sites the suspense inherent in an empty CCTV shot and yet his frequent use of overlaid images only seems to weaken the power of this thoughtful short.

A grander and more intoxicating experience, London Labyrinth is a 40-minute exploration of the city using archive film. Baring similarities to Julien Temple’s London – The Modern Babylon, London Labyrinth is narrower in scope but also more personal. We fly across the capital with clips of the city through the years mixed with samples from film and television including Miss Marple, The Face of Fu Manchu, and The Firm. There’s something exciting about watching Gary Oldman’s yuppie thug Bex being spied on by John Betjemen (in a clip from Metro-land). The links here are playful, the music invigorating and the use of sound clips (featuring the likes of Orson Welles) inventive. The result is an idiosyncratic love letter to the city and to film itself. 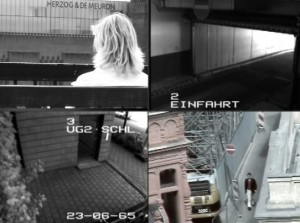 Unrequited Love (2006) is Petit’s feature length meditation on stalking. Although based on the novel by Greg Dart Petit’s film wanders freely, musing on ways of seeing, alienation in the city, technology, thoughts on film and his own experiences of London.

There are many interesting ideas here but like the act of stalking the film feels indulgent and ultimately self-defeating. Through Petit’s voiceover we hear of his early years in London visiting film locations as a way to find solace and connection amid the confusion of city life. There are sections that cover similar ground to Surveillance looking at the power of the gaze and the control of CCTV.
Meanwhile the characters move through the city. We watch them closely but they remain as unknowable as the muddied water of the Thames that Petit’s camera zooms in on. What may have worked as a collection of short films is instead mixed into incoherence without any of the clarity that Petit demonstrated in his striking debut Radio On.

Petit’s films are always at a remove whether though the use of found footage or the director’s particular distant viewpoint. This is a cinema of ideas, of searching for the telling detail. It’s an important endeavour and (like London) Petit has the ability to engage, surprise, and alienate.