Over at Empire Magazine, they posted up a new image of the forthcoming Margaret Thatcher biopic starring Meryl Streep poster, entitled, The Iron Lady. The film is being directed by Mamma Mia’s Phyllida Lloyd and stars Streep as the British Conservative Prime Minister who was in power from 1979 to 1990. 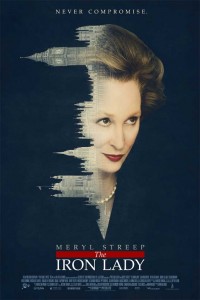 Lloyd’s film finds Meryl Streep playing Maggie as she takes stock of her life both personally and in politics. Now battling ill health and frustrated by retirement, she’s also haunted by the presence of dead hubby Denis. We track her rise to power and the toll it took on her life – for all of her political triumphs, she made many enemies and was castigated for some of her decisions.

With the likes of Anthony Head, Jim Broadbent, Richard E Grant, Olivia Colman and Harry Lloyd among the cast, The Iron Lady will be out on January 6.