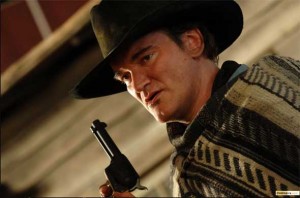 Quentin Tarantino is rumoured to have confirmed his latest project as Django Unchained. Little is known about it at present, but Django is a prominent figure in the spaghetti western genre so we can assume QT’s returning to the B-movie. Django is essentially the Italian ‘man with no name’ who cropped up initially in Sergio Corbucci’s 1966 Django, and has since had numerous reincarnations. The most recent of which was in Miike Takashi’s Suriyaki Western Django in which QT had a cameo role, and perhaps it was onset where he was inspired to make his latest project. There has been Western influences on many of his work already, most notably the opening of Inglourious Basterds, which wouldn’t have looked out of place in a Sergio Leone film.

With Tarantino’s love of quirky characters and cartoon violence, the spaghetti western may just be the perfect genre for the director.