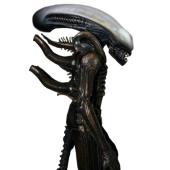 Sigourney Weaver has worked with James Cameron in Avatar recently. While being interviewed on the red carpet heading into the Oscars she was asked what she thought when Cameron first asked her is she wanted to be involved with Avatar, her reply – “the most ambitious script i’ve ever read”. She had nothing but praise for Cameron and tipped him for success in tonights Academy Awards.

She has previously worked with him in 1986 with great effect, in the film Aliens. One of the greatest sci-fi movies ever made and one of the rare sequels that lived up to the original movie. Aliens was so well received that it cemented the popularity and led to the ongoing Alien franchise and legacy.

For true fans of the Alien series, check this out… surely the ultimate gift for any Alien fan – A 1:1 Lifesize Scale Alien Xenomorph Statue, full life size, it stands 7’8″ tall.