Deadline announced during the week that 20th Century Fox and Bruce Willis have finally chosen John Moore (Behind Enemy Lines, The Omen, Max Payne) to direct yet another sequel in the form of Die Hard 5 (Or Die Die Die Die Die Once and For All!!!!!*).

As previously rumoured online, the fifth film in the Die Hard franchise (originally directed by John McTiernan in 1988) will be shot in Russia and will hopefully be made before Willis moves onto the scheduled Red sequel for Summit Entertainment, although they are also searching for a director as Robert Schwentke (director of the first) is busy working on R.I.P.D due out next year. (So, it looks like a rushed production for number five in the series, do you reckon this could be an improvement?) 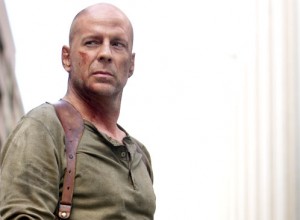 John Moore is currently in final negotiations and was in the running through the entire search as Fox tried to find a filmmaker that pleased Willis and the studio execs that have to shoot this movie in Russia and bring it in on a budget and a tight schedule.

So if it looks like the journey to getting Die Hard 5 on screen isn’t going to be an easy one, it wasn’t made any easier since director, Noam Murro left the picture after he was chosen to direct 300: Battle Of Artemisia for Warner Bros. The studio had a large list of directors to helm the script by Skip Woods (The A-Team, G.I Joe: The Rise of Cobra).

Star of the Die Hard , Bruce Willis has been keeping a close eye on who Fox chose for director and actively took part in meetings to find the right person. It appears what swayed Willis was swayed was Moore’s grasp of how to shoot practical, non-CGI-heavy action scenes that have been a hallmark of the Die Hard series.

The most recent instalment in the franchise, Live Free Or Die Hard, grossed $384 million worldwide on a budget reported to be $100 million.

*Not the official title