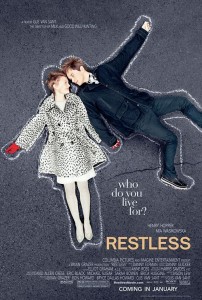 A day before a press conference is held in Paris to unveil the Cannes 2011 Official Selection, Cineuropa reports that Gus Van Sant‘s latest film, Restless, will open the Un Certain Regard category on May 12 at the festival.

Van Sant is no stranger to Cannes: his Elephant won the Palme d’Or and Best Director prize in 2003 and Paranoid Park won the 60th anniversary prize in 2007.