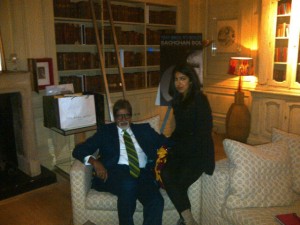 The Indian movie mega-star yesterday held an exclusive conference in London’s Soho Hotel, where he was joined by ex-Big Brother presenter George Lamb to discuss the benefits of modern social networking.

Bachchan was voted Greatest Star of the Millennium by the BBC in 1999, beating out hundreds of Hollywood heavyweights.  He was then recognised for his outstanding contribution to the world of cinema in 2001, when he received the Actor of the Century award at Egypt’s Alexandria International Film Festival.

Though his bonafide superstar-status was only established in the UK when he became the first Indian film star to receive a statue waxwork at London’s Madame Tussauds museum in 2000.

So it’s only natural that one of the most famous actors on the globe transcends his big screen success over to an online medium. Bachchan launched “vogging” to allow his fans and subscribers to hear direct updates through their phones, while also providing a service where they can leave messages for the star to hear.

With the service already boasting over 2.5 million subscribers in India alone, his vogging service entitled ‘Bachchan Bol’ is set to take the UK by storm.

Be sure to check out www.desi-box.com to catch the exclusive interview from Soho Hotel.