Last years onedotzero festival featured a very special Ninja Tune 20th birthday celebration. This year was equally as heavyweight, with a retrospective of Björk’s videos from her 18 year (so far) career.

The introduction to the show featured a great custom made intro from Miland Suman and Paul Greeno. I tried to embed it below but i wouldn’t let me! So you’ll have to go here to check it. 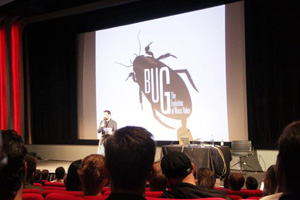 As always, BUG was hosted by the formidable Adam Buxton. Adam has over the past few years carved himself a very nice career from his passionate love of music videos and nobody is complaining. His comedy suits the audience perfectly.

This particular look back synced up nicely with the launch of Björk’s new album – Biophilia.(Which means – an innate love for the natural world, supposed to be felt universally by humankind)

Since the early days, Björk has been a real pioneer of the visual arts. Always championing new styles, using upcoming directors and trying to push the boundaries of the music video medium to do something a little bit different. It hasn’t always worked but on the whole, she has some truly iconic videos in her back catalogue.

Björk has worked with many directors over the last couple of decades including Spike Jonze, Chris Cunningham, Stephane Senaoui and of course Michel Gondry. Arguably, either inspiring them or giving them even free reign to create some of their best work.

And so it began…

Human Behaviour
Director: Michel Gondry
1993
Largely unknown at this stage, Björk teamed up with Gondry. The initial concept was ‘a song about human characteristics and that we should just see animals to show how humans are crazy’.

Army of Me
Director: Michel Gondry
1995
One of my personal favourites is the second collaboration of Björk and Gondry.

Hidden Place
Director: Inez & Vinoodh & M/M
2001
Directed by photographers Inez van Lamsweerde and Vinoodh Matadin in Paris with the team at M/M. They recently were contracted again for shooting the artwork on the cover of Biophilia.

Wanderlust
Director: Encyclopedia Pictura
2008
Created by Sean Hellfrisch and Isaiah Saxon, and taking a total of 9 months to make – a serious project by anyones standards. The final master version was actually made for full stereoscopic 3D, one of the first teams to do so.

We then had a short interlude to get a sneaky look at the new Biophilia app – described as the first ‘app album’ – being more than just a collection of songs, each track has its own iPad application including some animation based and some more interactive. Although they did seem fairly limited at this stage, it’s good to see someone like Björk pushing the technology to new places. And safe to say, Adam managed to put it through it paces with a live iPad link up to the main cinema screen. Here are some screen shots of the app – the galaxy looking one is the menu screen… 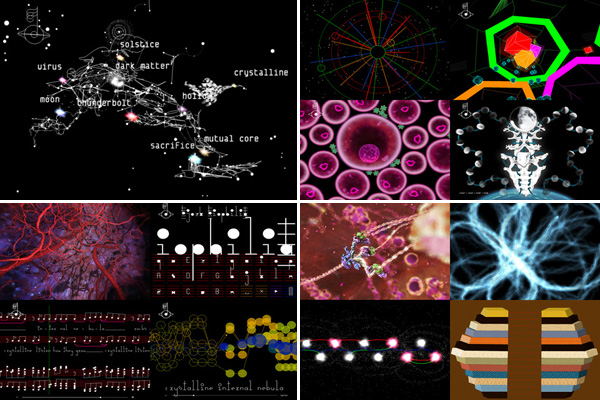 We were then treated a special guest – Patrick Chen from Lynn Fox. He is from another of the directing teams that has worked with Björk on a number of occasions since 2002. Fresh out of college when he first teamed up, he began creating groundbreaking CGI which eventually would culminate in a significant part of Björk’s live shows. In particular the Opening Ceremony at the Athens Olympics.

Patrick described how manic the preparations were for the Olympics show, Björk was to be raised up on a platform 6ft above the ground level, with a huge dress that had been custom made… but a fuse blew just at the wrong moment and she remained at the same level as everyone else but ultimately continued as if nothing had gone wrong.

Nature is Ancient
Director: Lynn Fox
2002
The only video is which Björk does not appear.

Oceania
Director: Lynn Fox
2004
The Athens visuals became a basis for this next work.

All is Full of Love
Director: Chris Cunningham
1999
The greatest of Björk’s videos without question. Sublime. Björk reportedly wanted it to be a lot more hardcore too but Cunningham had the final say, he was worried it would detract from the music too much.

Triumph of a Heart
Director: Spike Jonze
2004
The third Jonze collaboration. Björk fights with her boyfriend, who is also a cat.

Big Time Sensuality
Director: Stephane Sednaoui
1993
This was the first time anyone saw Björk on a big scale and back then nobody knew if this was the first or last we were seeing of her. Those who knew, knew and here we are 18 years later.

It’s Oh So Quiet
Director: Spike Jonze
1996
Possibly the most famous of her videos – first debuting in 1996. A fitting end to a solid retrospective.

In summary, an awesome selection of videos, and presented with a good mix of comedy and substance. The usual trawl through users YouTube comments relating to each video is always a treat. It was a little annoying that every time Adam referred to Björk, he would also give all the variations that you’ve heard over the years Björk, Bjork, Byork, Bjerk etc – It was funny the FIRST time.

It’s a shame too that some of the earlier videos showed their age with a noticeable lack of quality and definition but hey, what can you do about that?

There were some other great videos too which didn’t get an airing such as Play Dead, Violenty Happy, Isobel, Moon and many others but you have to draw the line somewhere.

BUG continues it’s march on world domination, next stop for Adam and the crew is their Australian debut at the Sydney Festival 2012.

The next event at the BFI is in early February 2012 and a whole host of other UK shows to come next year too, Liverpool, Manchester, Cardiff and more i’m sure. To keep up to date join the mailing list on the BUG website.