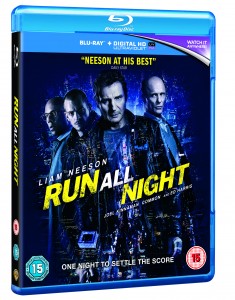 QUESTION:  So this is your third film in a row with Liam Neeson.  What does he bring to the table that makes you want work with him again and again?

JAUME COLLET-SERRA:  It’s great.  Why wouldn’t you want to work with Liam?  I mean, you’ve met him, right?  Sweetest person in the world.

QUESTION:  You have a wonderful cast in this film—Liam, Ed Harris, Joel Kinnaman, Common.  How do you bring out these sides of them for a story like this, which takes some dark and wild turns?

JAUME COLLET-SERRA:  They’re fantastic actors.  Everybody knows that Ed is charismatic and intense, and Liam has just absolutely no limit to anything that he can do.  He can be funny; he can be scary; he can do anything.  He’s a professional.  He really loves these kinds of movies, where he can do fights and car chases and, at the same time, have scenes that deal with themes of family, fathers and sons, and the things kids carry from their fathers.

QUESTION:  You filmed on the streets of New York and seem to have found some out-of-the-way places.  Did you find yourself discovering things about New York as you were making this film?

JAUME COLLET-SERRA:  New York is amazing.  We talked about maybe shooting in other places but really fought to shoot it here.  The year I was doing Non-Stop, I was thinking, ‘I want to do the New York movie that I haven’t seen before.’  It doesn’t need to be like a postcard, but it doesn’t need to be uber-cool or super edgy either.  It just needs to be sometimes ugly, sometimes not—just real.  So I started looking and then kind of tried to create a world within a world.

For me, the big breakthrough was going under the L train.  I always liked the fact that the L kind of frames the street, and then was thinking, ‘Well, what if everybody who is connected to the Mafia lives near the L, and the train is always going by like the Mafia connections.  Then that started sort of narrowing down the locations, because Jimmy’s character had to live next to the train.  Shawn’s son had to live next to the train.  The bar was underneath the train.  After the car chase, they get on a train together.  So it started narrowing things down for me and that kind of creating this world.  It was just something you start noticing—that it’s like a lifeline that connects all the characters.

QUESTION:  Can you talk about the colors and the kind of palette you wanted for this film?

JAUME COLLET-SERRA:  We shot on film, which I’m amazed that I can still do.  But I keep saying I want to shoot anamorphic, which is very, very difficult to do at night and in tight spaces in terms of the focal length.  You can’t get the lenses very close to the actors.  And we shot everything in very, very low light.  And then film allows you to kind of push the highlights and create a certain look, which sort of brings out the contrast and the colors a little bit.  We like to mix temperatures a lot, to create dimension in the frame, just like you would do with contrast, but with colors as well.

And, obviously, there’s always the evolution of your character, which I do in every movie—in Unknown and Non-Stop and in this one—Liam’s character starts out looking one way and then ends up looking another way, and we do that with color and makeup filters and all of that.

QUESTION:  You have to chart that out because you’re not always shooting in sequence?

JAUME COLLET-SERRA:  Oh, you chart everything out.  Everything is out of order entirely, so you know exactly where you are in the story, and who has what colour, and how you bring them together.

QUESTION:  Can you talk a bit about the Westies gang in terms of its relation to the story?  It’s never mentioned in the film except when one of the guys mentions Mickey Featherstone.

JAUME COLLET-SERRA:  We tried to thinly connect these characters to a real Mafia, in the sense that to anybody’s knowledge there’s nobody left in the Westies.  That’s why we say ‘thinly.’  I mean, we didn’t want to say it because that gang was dismantled 20 years ago, and those guys went to jail, death or the witness protection program.  So we don’t want to be like, ‘Yeah, they are the Westies.’  But what if two young people from that era had escaped, had started their own thing somewhere else in Queens and then they kind of learn from their own mistakes and had amazingly been able to survive?

QUESTION:  How did you know you wanted to be a filmmaker as a career?

JAUME COLLET-SERRA:  Since I was very young, I just wanted to make movies because movies were a way to escape my life mentally and I felt, ‘Well, if I’m making a movie, then I’m permanently escaping.’  And I found out that was true.

QUESTION:  Liam and Ed both bring so much experience to the table and yet both said they were happy to get your direction.

JAUME COLLET-SERRA:  I’m a very simple director, very specific.  Everybody knows what I want and what I need and when and how.  So if nothing else, I’m not a big talker or ever say, ‘This means that…’  That’s not how I direct.  I’m very much like, ‘Remember to do this.’  Very simple.

QUESTION:  How important is the music and sound to you in the storytelling? 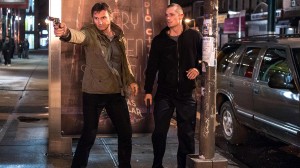 JAUME COLLET-SERRA:  Very important.  For me, the biggest challenge was that it’s a loud movie, because it involved trains, and gunshots and New York City.  But we didn’t want to overpower fight with the music or sound.  If you have the music that is delicate and you are in a train, what do you do?  And Junkie XL created something very modern that has its own frequency almost, with a sense of destiny and heart.  I was amazed at what he could do.  He was really inspired.

QUESTION:  What did you think about what Joel Kinnaman brought to the role in terms of the boxing element?

JAUME COLLET-SERRA:  Great.  That was something Joel brought to the table and he was actually involved in the dialog because it wasn’t originally in the script.  That’s why I think these actors are so great because they know it has to be believable, for example that Mike is able to get away and fight a little bit, so he’s not just always depending on his dad.  Because I don’t do any exercise.  If Liam was my dad, and this happened to me, I couldn’t be fighting.  But if I was a boxer, maybe I would try and it would be realistic.

QUESTION:  Can you talk about some of the directing you gave to Liam in terms of his character rallying to overcome age and booze to do this one last thing for his son?

JAUME COLLET-SERRA:  I think it’s one of those things where he is dead to the world when the movie starts.  He’s irrelevant.  And then this whole world comes rushing back in, and he has to deal with everything.  In a way, yes, it’s a problem of what’s happening, but in a sense it’s an opportunity.

QUESTION:  Ed Harris was doing Broadway at the same time.   What did you do to get him fired up for some of those intense scenes?

JAUME COLLET-SERRA:  I didn’t do anything.  He does it naturally.  He just goes [snaps fingers] and he’s on fire.  It was especially hard with the scene that we shot at dawn because it had to be at dawn.  There is no way to fake it; there are about ten minutes of light that’s perfect.  So you’re doing eleven setups in ten minutes; you have two cameras there; you’re moving everything.  But he was game.  There were also stunts and he was falling hard, and doing it over and over again.  And that was especially hard because the sun was coming up.