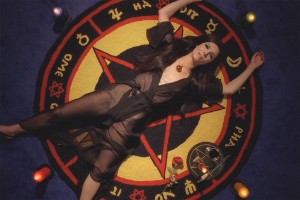 Anna Biller follows Viva with the insatiable, seductive and haunting The Love Witch. Partly an exploration of the sexploitation genre, mixed with elements of the mythic, the supernatural, 1960’s pulp novels, the gothic and everything in between – The Love Witch is a film with bite and leaves the audience reeling by the end.

The lead performance from Samantha Robinson as Elaine is totally unforgettable; she sets the screen a light with a presence that most could only wish to have – she speaks with her eyes and moves gracefully across the screen, guiding the audience along with her. Elaine is a a beautiful witch, who uses potions and spells to make men fall in love with her. However, often the spells work better than planned and loving Elaine is too much for the men that she picks up. Whether it’s the local teacher (who looks unusually like her first husband) or the husband of the realtor, her seduction knows no bounds.

But when Elaine meets the man of her dreams – the man that the cards tell her she will meet and fall in love with, she will do anything to get him, even if it means going mad herself.

Biller has truly created in Elaine an incredible heroine, the audience aren’t ever sure whether she is really using her magic for good or evil but The Love Witch isn’t concerned with her morals, but much more in the gender inter-play of the situation. The tables are truly turned as it’s the woman going after the man, rather than vice-versa but this also put Elaine in the driving seat of the relationship. The Love Witch is full of discussions around modern day feminism and the woman’s place in relationships.

The film also feels so intelligently put together – paying heed to the technicolour classics of the 1960s, with incredible costuming and locations, The Love Witch is sensational piece of filmmaking, which should showcase Biller as a female filmmaker to keep an eye out for.