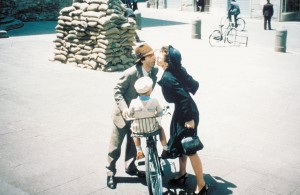 To celebrate Valentine’s Day, we are giving readers a count down of some of our favourite romantic films – selected by contributors to Front Row Reviews.

If you want a gorgeous and atmospherically shot film depicting a sweet and playful love story amidst the chaos and cruelty of Nazi occupied Italy in WW2, then Life is Beautiful is what you’re looking for. Roberto Benigni directs and stars and never will you see a more sincere and charming performance, especially with the backdrop of executions, death camps and tragedy. One of my favourite films, soundtracks AND Oscar acceptances. “It’s always a question of love”.

Richard Linklater’s transcendent Before trilogy makes all other romance films seem like cheap imitations of the real thing. And, of these, it is Before Sunset (a film that’s closer to perfect than any other I can think of), that manages to capture the heady joy, the awful pain, and the ineffable warmth of being in love (all in under 90 minutes). Playing out in real time, we watch Jesse and Celine catching up after 10 years apart and between the words are fleeting (and masterfully directed) moments that betray the truth of their relationship. The final scene is note-perfect and manages to tease, satisfy and move all at once. A truly beautiful picture.

I was one of the earliest champions of this film and one of the few who paid to see it in the cinema. And yes I am constantly mocked for this. But it’s a cute British romcom in the vain of Richard Curtis, but written and directed by Ol Parker. It’s my guilty pleasure and now it is also fair to say a lesbian classic.

Working Title and Nicholas Sparks have seemingly duopolised Valentine’s Day. Publicly enjoying the former and guiltily watching the latter, I have not forgotten romance exists outside Hugh Grant movies and paperback-film adaptations. For plot and aesthetics, I turn to Luhrmann’s Red Curtain Trilogy. For intellectual candor, the Before series. For sheer comfort, Sabrina (1954). Arguably under-noticed, Sabrina pacifies my singledom angst. Never moving more quickly than it must, the picture dreamily unfolds. And Audrey Hepburn, in her turn as the title character, never fit a role more perfectly. Vulnerable but bold, she hit nearly every emotion one feels when in love. The strength of her performance and the story itself perhaps explain how Sabrina has endured as a classic. And why Hollywood attempted to capitalise on its universality in the very 1990s Harrison Ford remake. Mr Flockhart aside, Sabrina remains a favorite. 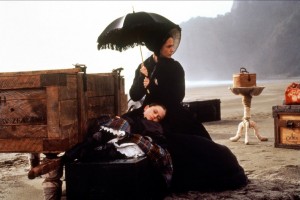 Jane Campion’s award winning drama is one of the most beautifully told tales between a mute pianist (Holly Hunter) and George Baines (Harvey Keitel), a retired sailor who has adopted many of the Māori (indigenous Polynesian people of New Zealand) customs. When Ada McGrath (Hunter) and her daughter, Flora (Anna Paquin) are sent from their home in Scotland to New Zealand, after Ada is sold into marriage to a frontiersman (Sam Neill), it isn’t until Ada starts to play the piano for George that she starts to feel comfortable in her new surroundings. Simple and yet incredibly intense, the love between Ada and George slowly flourishes, giving birth to some of the most memorable love scenes in cinema.

The endless possibilities of longing, of new territory found and explored, and the feelings of invincibility and optimism that come from those… Then, denied by the dialectical reality: that confronting feelings transforms them, embracing and exploiting new terrains changes them, sucks their resources up. In Smith and Pocahontas we find capitalism’s relationship to the land it pillages with ceaseless toil. “Did you find your Indies, John?” she asks. “I may have sailed past them,” he answers.

Jean Vigo’s only feature uses lyrical surrealism to explore the simple tale of a honeymooning couple who split apart only to be overcome by the pull of their collective love. The naturalism in the acting, heart and clarity of Vigo’s vision, and one of the greatest sex scenes (with bride and groom far apart but dreaming of each other), combine into a beautiful swooning tale that’ll make you fall in love with cinema all over again.

In Richard Shepard’s off-beat 1991 rom-com, frustrated escape artist Lucy (Rosanna Arquette) pairs up with bartender-with-a-murky-past Monte (David Bowie) to rob Café Dali, the bohemian restaurant at which they both work. The film oozes surreal charm and quirky humour, supported by an exquisite Thomas Newman jazz score and an originality rarely found in the romantic comedy genre. Although the director has all but disowned the film, it is a stunning debut and a guilty, sexy little treat. Keep your eyes peeled for the cameos. 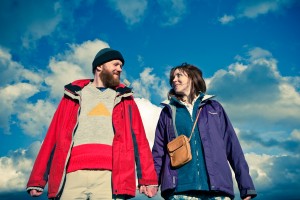 Like many Valentine’s Day trysts, Ben Wheatley’s film pairs two wayward souls bonded mainly by loneliness and lust. Alice Lowe plays Tina who, looking to escape the daily dependence of her elderly mother, embarks on a murderous caravanning holiday with her new boyfriend (Steve Oram). Sightseers is a fantastically bizarre black comedy with a strangely realistic love story at its heart.

A beautiful but tragic love story from 1993. Adam (Christian Slater) plays an extremely shy orphan guy, who grows up believing his was given a heart transplant from a baboon as a child. He takes a shine to local waitress (Marisa Tomei) and saves her from being raped on her way home after her night shift. After which the pair start to become friends and begin dating. It was not well received critically but has real emotion, tension and comedy. The chemistry between the two main leads is great to watch. The film takes you on an engaging romantic journey that you won’t forget. 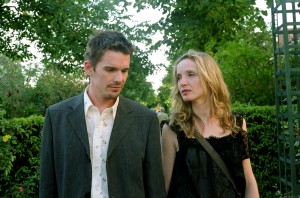 The sequel to Before Sunrise is a lesson in rueful yet optimistic romanticism. When Jesse and Celine reconnect 9 years after their magical night walking the streets of Vienna, they are confronted by a sobering sense of lost time and of paths that have delved down different roads. Against the ticking clock of Jesse’s impending flight back to the States, they traverse Paris and discover that the intervening years may have taught them something about that cherished memory. Their conversation is absorbing. The honesty of their romance is a seductive joy.

Nothing says romance like a meek professor harrassed by a bonkers heiress. No, really – Bringing Up Baby’s lunatic plot has at its core the creation of a genuine connection between David Huxley (Cary Grant) and Susan Vance (Katharine Hepburn), their lively, frisky rapport acting pulling all the disparate plot elements – a leopard, a dinosaur bone, a rich aunt, a dog, and another leopard – to a film that understands the maddening desire and the exuberant fun of love. As they sing to the leopard, “I can’t give you anything but love, baby.”