Ralph (John C Reilly) wrecks things. Well he did in the game Wreck it Ralph. Now he has best friend Vanellope (Sarah Silverman), they go out ever evening and have fun. When Vanellope says she is bored of ‘Sugar Rush’, Ralph fixes it with a new track. However this ends in disaster when a child breaks a steering wheel on the machine. Now it is for the two to stop the machine being sold for scrap. They need to use the newly installed Wi-Fi to acquire a new steering wheel. 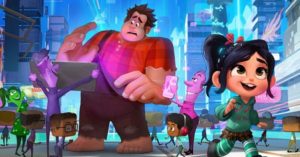 Wreck it Ralph seemed to appear from left field, when the first trailer landed some 7 years ago. A computer game related film that parodied the (then and now) obsession with 8- 16 bit arcade games, 80’s culture and of course the beloved arcade. The sequel was an obvious step. After all success and Disney always means a scheduled repeat. These often work well enough to retain box office and audiences but lack the originals ability to add texture. Pixar products have been better versed at avoiding this pitfall. Either they avoid making a sequel or they make a superb film. 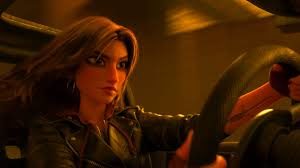 Ralph Breaks the Internet is a clever sardonic slap in the face to modern culture and achieves the latter. Ralph gets online experience at its core. The outages, the spam, the viruses and the little random notes that appear while surfing. It could have felt like a prolonged advert but thanks to clever commentary, the introduction of ‘real’ princesses and that real world game player issues, we avoid this becoming so. Its a big bold brash film that is pretty much Ralph in VHS format…so to speak.