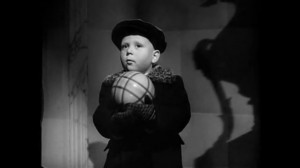 When Holly met Harry or to be more precise, when Holly tried to meet Harry and he was actually dead. That is the tagline that isn’t used for the greatest film noir ever made. Holly Martins has travelled to Vienna after the end of the Second World War. He has been sent for by Harry Lyme to work for him in his new venture. However when Holly arrives he is met with a complex situation. Harry is apparently dead and his venture is actually a front for the illegal sales of doctored penicillin. This it transpires has been sold to innocent people and the medicine has claimed the lives of children. All of this is of course unknown to Holly but as he is a friend of the late (and soon to be resurrected) Harry, all eyes fall on him as the surviving culprit. Now Holly has to discover the truth about Harry, those sewers, that light in the window and the fair ground. 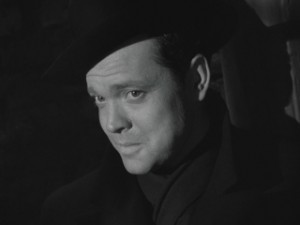 Heres looking at you!

This is a Brechtian dream; not only is this art through image and story but also a morality tale as well. For me this is the greatest film from the post war period. It reflects on a subject so difficult as to be almost impossible to talk about; those people that conspired to make gains from the most vulnerable and poor. What is surprising however is that it is produced with such a charm. The acting is almost faultless, Cottons performance as the naive but rational Holly is a joyous thing. Howard is measured and Welles, well he was mesmeric. In stature and tone but in his performance as Harry that mysterious Hyde like character, he is awesome. He gives such a rough person, an intense empathy as to make the devil himself a drinking buddy.  See this as a metaphor for American involvement in Europe or Capitalism? The world had like the final sewer began to close in around us where altruism and empathy had died like so many on the battlefield. 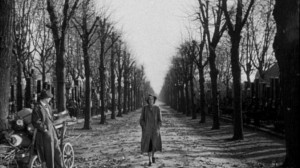 This is more than just both Greene’s (the writer) and Reed’s (the director) masterpiece. Greene gives the script a gravitational power. His name alone conjures a background of mastery and post colonial misery. This film links that with a future gloom of corruption, hubris and technology. It illustrates the cold wars origins in the post war landscape of cut throat capitalism and empty promises of the new world order. Take its ladies club that live akin to an English village and sits listening to Holly as if that is the world that matters. Reeds work has finally been restored to its magnetic best. Black and white hues capture the locales and the faces of those past. The little images of day and night are crisp. The 4K has made this so much more now that I implore you to buy a copy.