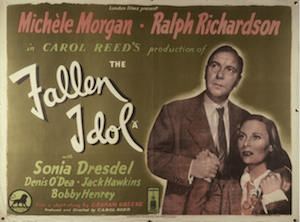 In 1948 and 1949, producer Alexander Korda and director Carol Reed made two successive films from screenplays by Graham Greene based on his fiction works: The Fallen Idol and The Third Man (a decade later Reed would make Our Man in Havana as well). While The Third Man appears regularly on lists of must-see classics and critics’ picks of all-time greatest films (it’s also #111 on the IMDb’s list of 250 top-rated movies), one hears a great deal less about its precursor. 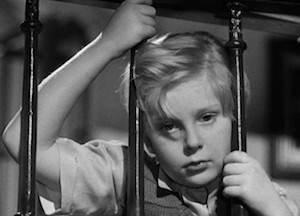 In The Fallen Idol, eight-year-old Phillipe (Bobby Henrey) is the son of the French ambassador to London, left alone by his parents in the care of the embassy butler, Baines (Ralph Richardson). Given his parents’ frequent absences it’s no wonder he has grown devoted to his guardian; far less does he like the cold and domineering Mrs Baines (Sonia Dresdel). Baines is fond of the boy, but Phillipe also provides an effective cover for the butler’s affair with a young typist, Julia (Michele Morgan). When Mrs Baines grows suspicious and plots to expose the lovers, a tragic accident leads Phillipe to suspect his idol of murder – and in lying to protect him merely succeeds in drawing the police’s attention toward Baines.

It’s almost impossible to consider The Fallen Idol without also recalling The Third Man, but they are vastly different films. The Third Man involves international intrigue, Orson Welles’s virtuoso portrayal of the mercurial Harry Lime, mad dashes through underground tunnels and dizzying bird’s-eye views of Vienna from the iconic Wiener Riesenrad Ferris wheel. The Fallen Idol is a more genteel, domestic thriller, shot mostly on a lavish set designed by Victor Korda at Shepperton Studios with locations around Belgravia and at London Zoo. 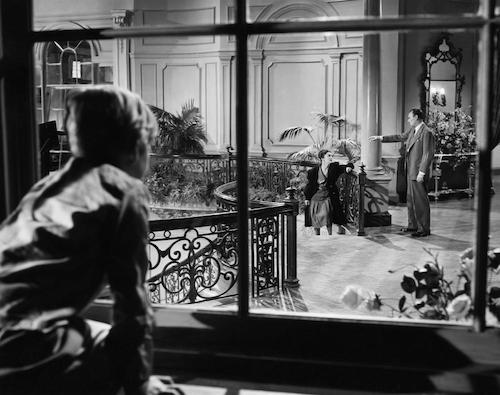 Yet the less hyperbolic settings of The Fallen Idol do nothing to diminish its tension. Partly thanks to Bobby Henrey’s short attention span and inability to “act his way out of a paper bag” (according to assistant director Guy Hamilton, later veteran of three Bond films and the delightful Evil Under the Sun), Reed favoured more rapid editing than was common for such a film of the period, and the result is a briskness of tempo that gives the narrative freshness and pace normally associated with more modern dramas. Korda’s grand sets are stunningly shot by Georges Périnal, using light and shadow in much the same way that Renoir did in La Grand Illusion, in its darker scenes evoking the claustrophobia of German Expressionist cinema. 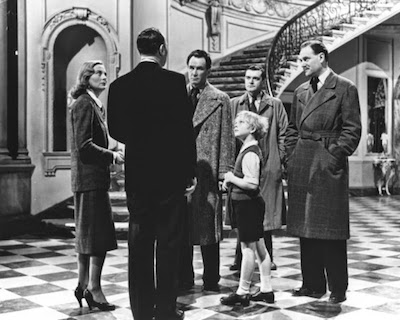 The film is presented largely from Phillipe’s perspective; he is dwarfed throughout – literally by adults and figuratively by their world, their actions, their needs and motivations, none of which he comprehends. Even the audience knows more than he does, so the film is rich with the dramatic irony that is a defining element of British noir: we understand why he draws the conclusions he does and we empathise with his intentions, while simultaneously willing him to shut up and stop meddling. 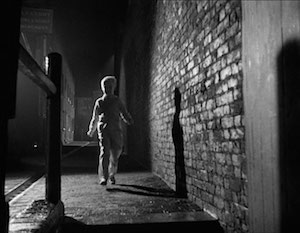 Despite having been constructed entirely in the editing suite from thousands of takes and faked reaction shots (Reed even resorted to employing a conjurer to get his child star to register delight and fascination), Henrey’s performance comes across as affecting and spontaneous. Morgan plays Julia with a lightness and sensitivity that underline the seriousness of her performance. Wonderful comic touches are delivered by performers in character roles, such as two Cockney cleaning ladies with a taste for blood and an affable streetwalker in a police station. 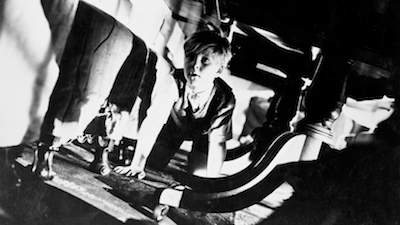 But the film’s star quite rightly is Ralph Richardson. Baines is the consummate Englishman, the perfect butler – yet never do we doubt the depth of his love for Julie or his fondness for Phillipe. Richardson is grave and understated, never overreaching or overplaying any facet of his complex role – surrogate father, lover, reserved butler and the idol of the title – it is a performance that hangs effortlessly in perfect balance. This also provides the perfect foil to Dresdel, who is splendid as his bitter and hysterically jealous wife.

The BFI release includes some rewarding bonus features, including interviews with the elderly “Bobby” (now Robert) Henrey, 93 year-old Guy Hamilton and Reed fan and director in his own right Richard Ayoade; as well as a highly entertaining tour of the film’s locations conducted by Richard Dacre.

The Fallen Idol deserves a place in every collection – it is a terrific film. It’s not The Third Man, but then not much is.